Notes for "A Kurt Weill Cabaret"
By Judith Eckelmeyer 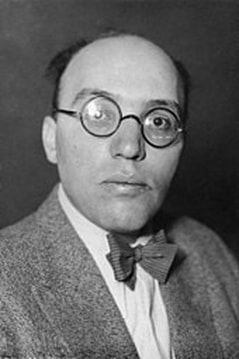 Kurt Weill in 1932
Berlin of the 1920's experienced the nova-like effervescence of a society in turmoil, born of the enormous social, political and financial consequences of Germany's loss of the "Great War." The "golden twenties" for Berlin meant a raging potpourri of scientific genius (Albert Einstein, Max Planck, Wernher von Braun), socio-political extremists (culminating in the rise of Goebbels and Hitler), intellectual and artistic pathfinders (Walter Gropius, Erwin Piscator, dadaists, expressionists of Die Brücke, Arnold Schoenberg, Alban Berg, Bertolt Brecht), and whole constellations of artists, composers and performing musicians, actors and writers (Käthe Kollwitz, George Grosz, Paul Hindemith, Arthur Schnabel, Ferruccio Busoni, Rudolf Serkin, Bruno Walter, Otto Klemperer, Pavlova, Marlene Dietrich, Pater Lorre, Christopher Isherwood, Vladimir Nabokov and many others). For the very wealthy, apparently nothing was out of the question if it would satisfy cultural, financial or sensual tastes; for the very poor, the condition called living was hardly recognizable as a human activity. 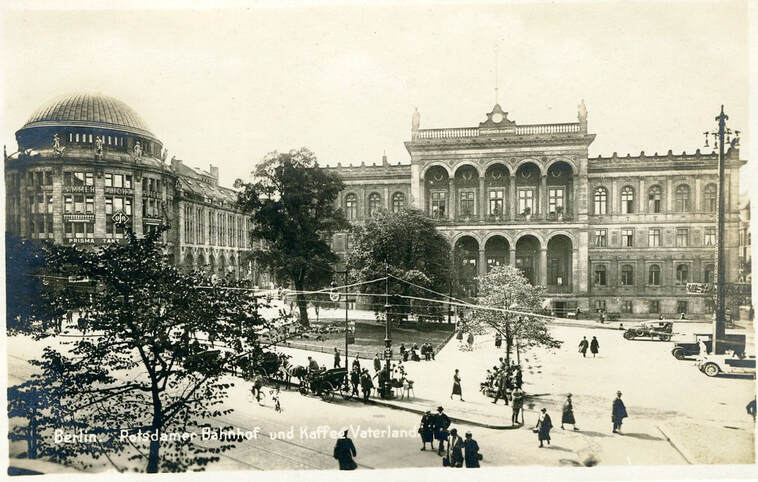 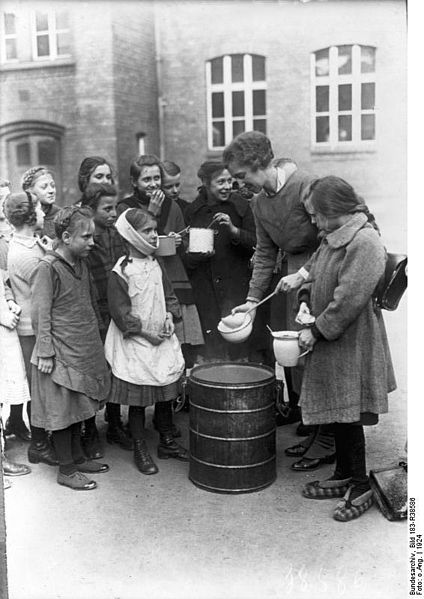 Berlin, Essen für bedürftige Kinder (food for children in need)
For Berlin, these extremes were bridged in the continuity of the local propensity for theater of all kinds--vaudeville, circus, music halls, and the smaller, dingier, more intimate and ruder cabaret. Typical of cabaret entertainment was the master of ceremonies, who introduced the performers in the course of an evening and also launched his own vituperatively witty barbs against social and political figures of the day. Witty cynicism, characteristic of the Berlin spirit in general, and a kind of underground humor with political overtones permeated the verbal and musical life of the cabaret. 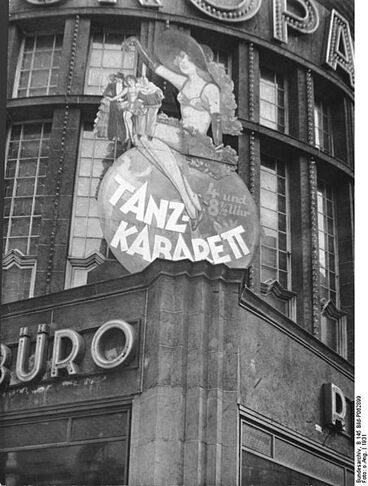 Berlin; Tanzkabarett im Europahaus, Stresemannstraße.
Out of this combustible culture of the 1920's came the first successful music of the Dessau-born (1900) Kurt Weill, whose formal traditional training in part at Berlin's Hochschule für Musik with Engelbert Humperdinck and later with Ferruccio Busoni framed the technical means for his earlier--probably forgettable--atonal, abstract operas and instrumental compositions. Ostensibly through his discovery of Bertolt Brecht's poems, Weill began a collaboration with the poet, whose leftist political opinions and theatrical concept of disinvolvement or "alienation effect" brought to his works what he termed as "epic style" in acting and, for the audience, "an attitude of one who smokes at ease and watches" (from his Notes to The Threepenny Opera in the 1964 Grove Press edition of the text).
​Out of their collaboration came two signal works: Die Creigoschenoper, or Threepenny Opera, of 1928, and Aufstieg und Fall her Stadt Mahagonny, or Rise and Fall of the City of Mahagonny, originally a series of five songs in 1927 and brought to its extended form in 1930. The strength of these two works lay in their remarkably matched adaptation of tawdry, common, even coarse musical elements to bold, defiant street-wise texts: 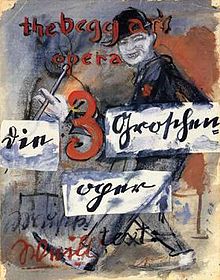 Original German poster for Threepenny Opera from Berlin, 1928
Weill made a drastic change in his own early musical style for The Threepenny Opera and Mahagonny, abandoning for the most part the formal techniques of academic music, continuing instead the emerging idioms of jazz, Latin American Piquant, dissonant tonality and infectious unconventional rhythms abound in these scores along with haunting melodies and refreshingly diverse song forms--one of them in The Threepenny Opera derived literally from the work's 18th-century model, John Gay's Beggar's Opera.
Gay's The Beggar's Opera - Act One
English Chamber Orchestra,  dir. Meredith Davies
Recorded October 31, 1963 BBC
Equally striking in these early successes is the tone quality predicated by Weill's specification of popular instruments such as the banjo, guitar, saxophones, accordion and harmonium in combination with small ensembles of more usual woodwinds, brass, percussion and piano. The use of untrained voices of cabaret singers rather than operatic specialists further contributed to the impact of the unrefined atmosphere in the original productions. Weill's wife, Lotte Lenya, who sang the role of Jenny in the first performances of The Threepenny Opera, really defined the vocal sound with what one critic (quoted by Friedrich in Before the Deluge) termed a "rasping voice that could sandpaper sandpaper," yet with a cabaret chanteuse's style of "terrifying intensity." This combination of instrumental and vocal resources remains an integral part of the Brecht/Weill depiction of bourgeois society, reflecting their Berlin environment in the 1920's.
Lenya's Cabaret: It Couldn't Please Me More (A Pineapple)
​Lotte Lenya and Jack Gilford · Cabaret Original Broadway Cast
But Berlin's was not the only culture affecting Brecht and Weill in those years. They were both fascinated with exotic sounds, and especially with what was a land of intriguing place names and supposed unlimited wealth and violence--America. Happy End, written in 1929, is a relatively unembittered fantasy of mobsters redeemed at the expense of the gentle corruption of Salvation Army members in the American city, while Lindbergflug of the same year, in which Paul Hindemith also collaborated, grew out of the American's famous transatlantic solo flight. Mahagonny, on the other hand, approaches the dark and destructive forces of mankind in a mythical Florida, with characters improbably drifting in from Alaska, and a song entirely in stilted English serenading human vices under the "moon of Alabama." A list of euphonious names and terms in these early works shows a strange assortment: Cooch Bahar and Surabaya, whiskey-bars and "Taifunen" (typhoons), Bilbao, Burma, Pensacola, coca-cola and others. 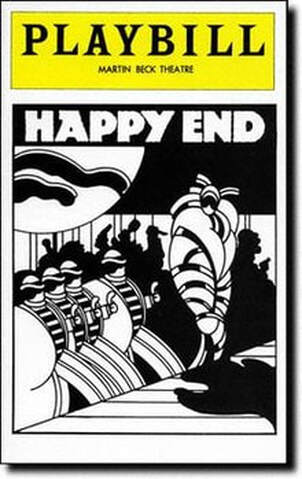 Happy End Playbill from 1977
Kurt Weill had the opportunity to see first-hand the country that had been evoked so often in the early Berlin works. With the Nazi disapproval of his Die Bürgschaft (Bail, with Caspar Neher) in 1932, and Hitler's increasing restrictions on personal freedoms of speech and the press in 1933, he went via Paris to the United States, continuing in collaborative efforts with many of the best lyricists of the late 30's and 40's: Paul Green, originator of many outdoor historic theater pieces such as Ohio's "Trumpet in the Land" (Johnny Johnson, 1935), Maxwell Anderson (Knickerbocker Holiday, 1938), Moss Hart and Ira Gershwin (Lady in the Dark, 1941), Ogden Nash (One Toch of Venus, 1943), Elmer Rice (Street Scene, 1947), and Anderson and Rice (Lost in the Stars, 1949). For these American works, Weill's musical style once again underwent a significant change, toward milder harmonies and more smoothly sophisticated orchestration and melody. But it is possible to see in some of the perennial songs from these years--"September Song" from Knickerbocker Holiday and "Speak Low" from One Touch of Venus, for instance--a bitter-sweet nostalgic flavor that had already been present in Polly and Macheath's Love Duet in The Threepenny Opera years earlier.
Lenya's September Song from Knickerbocker Holiday
Lenya's Speak Low from One Touch of Venus
Love Duet of Machete and Polly from The Threepenny Opera
Liane & Vienna State Opera Orchestra
During Weill's years of activity in the American theater, his Berlin works for the most part lay buried by the Nazi regime; not only the theater pieces but even a 1931 film version of The Threepenny Opera, with its revised ending criticizing bourgeois capitalism outright, were presumed lost in the purge of "undesirable" art.
Die Dreigroschenoper - Georg Wilhelm Pabst (1931)
​Two years after Weill's death in 1950, The Threepenny Opera was given its first major full-length revival at Brandeis University, and soon after in New York's Theatre de Lys, in an English-language version by Marc Blitzstein, who had first heard the work when he was in Berlin in the 20's as a student of Arnold Schoenberg. Blitzstein placed Lotte Lenya once again in the production and thus fostered a continuity of the original style of the Berlin production, bringing Weill's musical life practically to full circle for post-war American audiences. The New York Metropolitan Opera's recent incorporation of Mahagonny into its repertoire confirms the influence of Brecht and Weill on musical theater in our own time.
Judith Eckelmeyer ©1981