A Tribute to Franz Joseph Haydn
by Dr. Judith Eckelmeyer
​

Franz Joseph Haydn (1732-1809) was widely celebrated in 2009 at the 200th anniversary of his death. In his lifetime, he was at his maturity certainly the most famous and honored living composer, known across Europe for the large number and exceptional quality of his compositions. In our time, we recognize that he almost single-handely shaped the direction of the string quartet, piano sonata, and symphony as we know them, and his contributions to the literature of Mass settings and oratorio in the late 18th century are invaluable. As we shall see, the epithet “father of the symphony” was not devised for him in vain. 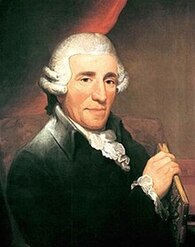 Portrait of Joseph Haydn by Thomas Hardy (1791)
Haydn’s early music training began when he was 8 years old and was accepted as a choirboy at the Cathedral of St. Stephen in Vienna. He remained with the choir for some time even after his voice changed. He began to earn a living as a freelance musician then, singing in the court choir and teaching. After some early efforts at composition he began to study more systematically with the composer Nocola Porpora. He found his first patron in 1759 while under Porpora’s aegis: Count Morzin, who lived in Vienna and also spent a lot of time in Bohemia. It appears that Morzin ran out of money soon thereafter, and Haydn began working for the Esterházy family perhaps on the side. He formally entered the employment of the Esterházy family in 1761. 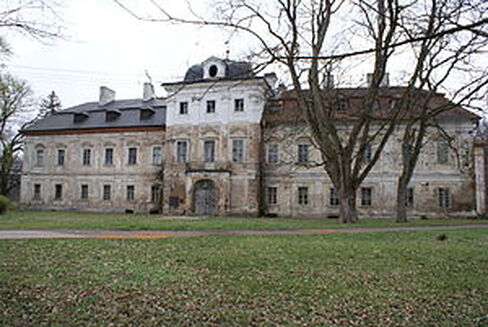 Morzin Palace in Dolni Lukavica, Czech Republic
At the Esterházy palace in Eisenstadt (then in Hungary), Haydn was charged with extraordinary responsibility and answerable directly to Prince Paul Anton in everything except choral music. (For this he was the subordinate of the senior music director, or Kapellmeister, Gregorius Werner.)
Among the first works Haydn wrote for the Esterházy court were three symphonies, in D major (no. 6), C major (no. 7), and G major (no. 8), all in 1761, which he himself titled “Le matin (Morning)”, “Le midi (Noon)”, and “Le soir (Night)”. The titles are noteworthy because at the time most symphonies were identified simply by their key (rarely a number). The titles suggest that these are “program” symphonies, describing something relevant to those times of day. The three symphonies are not at all similar in their structure; further, they contain features left over from other genres and earlier times, such as interconnected movements, instrumental recitatives, seemingly whimsical arrangements of tempos and styles, and a continuo. Haydn’s orchestra had only 10-15 players at the time.

Symphony 6 has the four movements of a classical symphony, but its “throwback” feature is its solo instruments—violin and cello soloists in contrast to the body of strings, plus a flute, 2 oboes, bassoon, and 2 horns. The first movement opens slowly with a “sunrise” before going on to the main allegro portion.  The second movement is primarily a duet between the soloists (the continuo is evident), essentially forming a concerto-grosso. The third movement is a minuet reintroducing the winds into the mix; the trio, in minor, features a bassoon solo and the solo cello. The last movement, Allegro, features the ensemble and all the individual instruments.

​Symphony 7, for strings (and continuo), 2 flutes, oboe, bassoon, 2 horns and strings, is in five movements. The first begins with a regal introduction, befitting royalty (a compliment to his new employer?), then goes on to a vigorous Allegro. The second movement is a dramatic, minor-key recitative (textless) for violin with orchestra accompaniment. This leads to a lovely, slow aria-like movement featuring solo violin and cello. After a minuet movement, the Allegro finale features soloist’s moments (as did Symphony 6).

Symphony 8, for strings (and continuo), flute, 2 oboes, bassoon and 2 horns, is in the more recognizable symphonic structure of the late classical era: four movements, Fast, Slow, Minuet/Trio, and Fast. Concerto-grosso elements are still here, particularly in the second movement (two solo violins and solo cello).  The point of greatest interest is the final movement, entitled “La tempesta”—the storm. Patterns in the music suggest rainfall, lightning, and thunder, but these are genteel, a passing shower rather than furious gale.

It is interesting to compare this “storm” at the end of Symphony 8 with the heightened effects of true Sturm und Drang (Storm and Stress), which one can hear in the first movement of Haydn’s Symphony 45 (“Farewell”, 1772. In Symphony 8, Haydn had not yet gathered all his forces of dynamic and melodic extremes, intense dissonance, and struggling agitation. I think he had yet to be exposed to the music of Christoph Willibald Ritter von Gluck’s ballet Don Juan (1761) and music of other dramas by Gluck which preceded the “Farewell”, for in these genres Gluck was free to invent whatever musical effects promoted the drama. It appears that once Haydn embraced the potential in dramatic music, he absorbed it into the symphony and transformed it into its powerful voice for the late Classical era, and he and Mozart (and others) made famous use of the style. 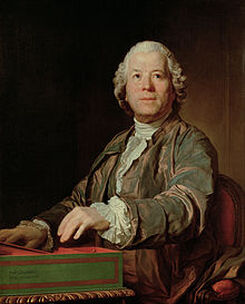 Gluck playing his clavicord (1775), portrait by Joseph Duplessis
Only a year after Haydn arrived at Eisenstadt, Paul Anton died and his music-loving brother Nikolaus succeeded him as Haydn’s patron and employer. Haydn served Nikolaus for nearly 30 years thereafter. In 1779 Haydn was contractually freed from the obligation to compose only for Nikolaus, and he began to accept commissions and publish a good portion of his music. His reputation grew enormously throughout Europe as he continued to compose. The last symphony Haydn wrote under Nicolaus’s employ was his 92nd, in G major, in 1789.  By this time Haydn was the most famous composer in the world, so news of his patron Nikolaus’s death on September 28, 1789, reached every major music center. Shortly thereafter, one Johann Peter Salomon, a violinist and concert manager in London, approached Haydn in Vienna to come to England; and Haydn, free of any other obligations, accepted.
He made two visits to England (1791-2 and 1794-5), where he was feted and honored by an adoring public. Respect for him extended even to the often-curmudgeonly halls of academe, and in 1791 he was awarded an honorary Doctor of Music degree at Oxford University. At the second of three commemorative celebrations of this event, the Symphony in G, no. 92, was performed, and thus it received the nickname “the Oxford symphony”.  And by the way, while in England Haydn still continued to compose symphonies – twelve of them over the two visits – which are known as the “Salomon symphonies”, or as a group the “London symphonies” (his last, no. 104, is itself called “the London Symphony”).

The 92nd symphony, “Oxford”, is a wonderful example of Haydn’s mature mastery of the genre. It employs flute, 2 oboes, 2 bassoons, 2 horns, 2 trumpets and timpani—a significant expansion over the 6th, 7th and 8th symphonies. The Esterházy orchestra would have provided probably 25 players for the “Oxford”, but in England there well may have been more strings performing.

The “Oxford” is in what by then had become the standard four movements (Fast, Slow, Minuet, Fast), with a slow introduction opening the first. This slow introduction is worth noting in some detail. It is one of the most ethereal beginnings ever conceived, and grows like a glorious sunrise (compare it to the 6th symphony’s short sunrise!), to direct the ear to the first notes of the Allegro section. A careful listener will be able to notice a thematic relationship of the middle voices of the introduction to the opening allegro theme—and here we have a forward leap in compositional unification that Mozart shared, that would feed the emerging technique of Beethoven and become a primary device of most Romantic composers.