A case in point:

A woman whom I met only several years ago, but who is now a good friend, moved with her husband from California so settle in the Cleveland area. She said she thought she was adjusting finally to Ohio’s climate, and was looking forward to growing roses such as she had seen in California. I jumped at the chance to show her the roses in our garden and invited her to come for a little tour. The day she arrived at our home, the rose bushes were leafed out and budding but the roses hadn’t yet bloomed. She looked around, puzzled, and asked where my roses were. I pointed out the nearly two-dozen shrubs, and she exclaimed, “But those aren’t roses! They don’t look anything like the roses I saw in California!” Showing her my photographs of beautiful blossoms, I encountered some more resistance. Those cabbage-shaped flowers, those neatly quartered blossoms bore no resemblance to her experience of “rose”. 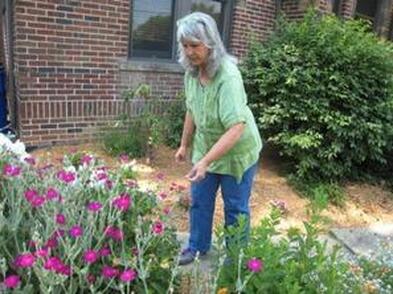 The California girl looking for roses in the garden.
It took some time and careful explanation to convince her that, indeed, I was growing roses, but that most of them were either antique, or coming from antique strains. There is nary a hybrid tea to be found on this property. Fortunately, my friend was, and still is, inveterately curious and she soaked up whatever information I could tell her or send her way. In the end, she fell in love with “old roses”, even discovered a neglected specimen among her own foundation plants, and then began to make her own collection of them in her garden. 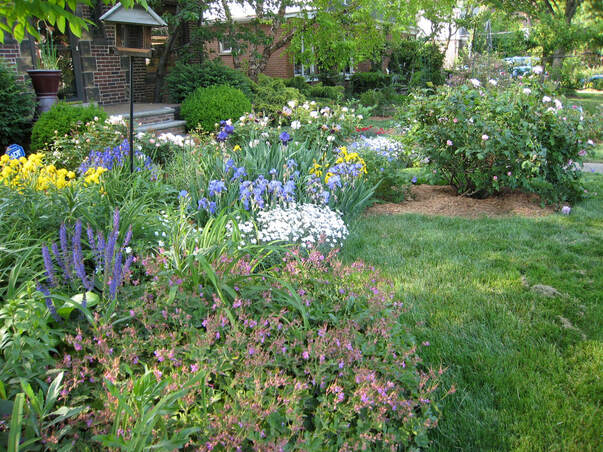 I thought I knew, as well, back in winter of 1992-3 when I picked up a Wayside Gardens catalog in the middle of February and looked eagerly for possible plants for my modest garden. There, about in the middle, was a description of a rose that I’d never paid attention to before, in spite of years of looking at this company’s plant offerings. It certainly didn’t read like that of the Hybrid Teas I’d been familiar with! What captured me was the description of its fragrance as so prized that its attar, its oil, was harvested for perfume—and had been for many centuries! The flower itself was rather unprepossessing, in my experience of the rose family. (I was soon to learn that my “experience” was sadly limited!) It had only a few very white petals lying rather flat around an admittedly spectacular burst of clear yellow stamens. I had seen some roses growing along a fence in the area that looked rather like this flower, but with only five pretty pink petals; but it had emitted the most wonderful scent, unlike any I’d encountered. I became intrigued with Wayside’s specimen.

I looked further in that catalog and discovered nearly a dozen more roses that were also described as very fragrant. They, too, looked very different from the roses I had experienced to that point. Wayside was proffering them as “old garden roses”, or “antiques”. Never heard of such a thing. So I took myself off to a well-stocked bookstore (remember them?) and found a treasure: Peter Beales’s Classic Roses. Therein were all the Wayside “old roses”, and hundreds more! My excitement grew as I read his description of the fragrances and growing habits of Wayside’s varieties. I was hooked—I craved those roses for my own garden. I’d never grown roses before, but I ordered ten plants, all different, from Wayside, read about the planting protocols, dug my ten super-size holes, and installed those roses that spring! (Now there’s a learning experience!) 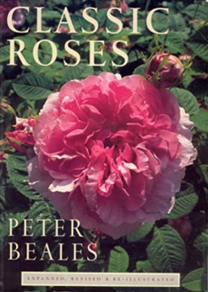 The results in subsequent years surpassed my imagining. Not only were these roses fragrant beyond belief, they had beautiful colors and a variety of shapes, from the simple semi-double of the Rosa Alba Semi-plena (the York Rose, the one I originally stumbled on in the Wayside catalog), to the elaborate, “hundred”-petaled and intricately quartered Fantin-Latour. I added other roses in that small garden, including the first Hybrid Tea, ‘La France’ for the sake of rose history, and found myself gaining lots of information about these amazing plants and, even better, getting guests interested, too. An annual “Antique Rose Appreciation Day” became a neighborhood event at the height of their bloom. 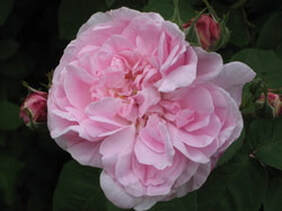 Fantin-Latour
​What I learned from developing that rose garden was that the old garden roses, often called “antique” roses or “heritage” roses, were worth my continued study and endeavor. After moving to a new location, I once again have built a garden of authentically old roses and roses developed from the old rose varieties. More sun, more space, and more roses—I’m a very happy camper!

There were no Hybrid Teas in my garden—just “true” Old Roses and subsequent modern hybrids from their stock. 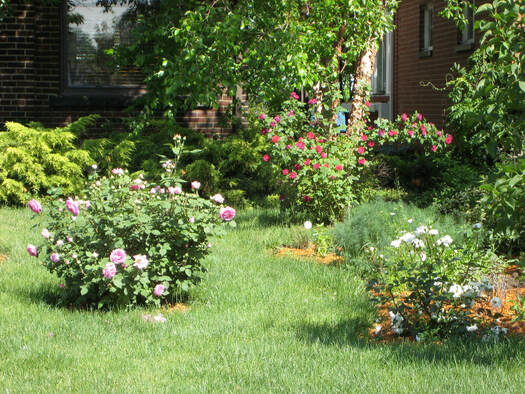 ​A bit about “Antique Roses”: these are varieties that existed prior to 1867, when the first Hybrid Tea, the silvery-pink ‘La France’, was developed by Jean-Baptiste André Guillot (père) (1827-1893), a nurseryman in Lyon, France. Any rose bred after that date is considered a “Modern” rose. The new Hybrid Tea rose looked quite different from the old varieties in that they displayed a single rose at the end of a stem rather than clusters on a stem; their flower was multi-petaled but more elongated than round, and restrained in size. They were also recurrent, blooming several times over the season. And they attained colors that had never been a part of the antique palette.
​By the turn of the 20th century Hybrid Teas were being developed and sold throughout the western world, and through the early decades the many new colors were so exciting that the variety virtually drove out gardeners’ interest in antique types. In developing the favorable traits of a wide spectrum of intense colors, stylized elongated buds and mature flowers, and long stems, breeders ultimately sacrificed fragrance, distinctive muted or subtle colors, and the beautiful “cabbage-rose” shape of the blooms. The Hybrid Teas required more regular feeding, watering, and careful cultivation, and of course had to be protected from pests such as aphids and Japanese beetles to maintain their glamorous good looks. 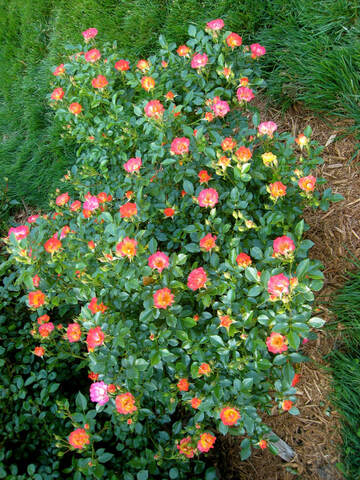 Carpet of Color Roses
​But the Old Roses were not gone forever. Writers, intrepid gardeners and nurserymen, and collectors like Gertrude Jekyll and Ellen Willmott took up the cause by writing books and developing garden collections of historic varieties in England. Rosarians such as Graham Stuart Thomas in England began to search them out in long-existing gardens and derelict sites in the countryside to furnish formal horticultural collections; cuttings from these old plants were carefully nurtured in new sites to build collections of the old varieties. In the 1920s scientists like Dr. C. C. Hurst in England began to study the genetics of roses, in part to solve mysteries about the evolution and classification of the old strains and hybrids that had developed over centuries. In the United States, especially in the South, a less formal process was under way to rescue and propagate varieties that survived in abandoned homesteads and mining towns, along country roads and in old cemeteries, and beside the homes that had survived the ravages of the Civil War. The collectors of these specimens are called “Rose Rustlers”, and many of their finds have been so well preserved and propagated that they are now available for sale; they are generally listed under adopted names since most of them haven’t been identified with certainty. 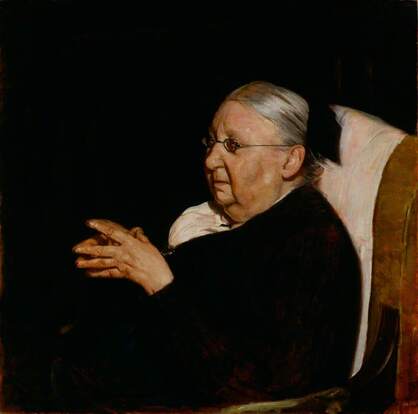 Portrait of Jekyll by William Nicholson, painted October 1920; commissioned by Edwin Lutyens, donated to the Tate Gallery in 1921. William Nicholson (5 February 1872 – 16 May 1949) - https://www.bbc.co.uk/arts/yourpaintings/paintings/gertrude-jekyll-157350, PD-US, https://en.wikipedia.org/w/index.php?curid=39819465
​Later in the 20th century, breeders such as David Austin introduced hybrids that integrate aspects of the Hybrid Tea with those of the old and antique roses; his varieties are a fine compromise for those who wish an antique-looking fragrant flower with greater disease resistance, long bloom, and interesting color.

So, what I wish to do in the sections of this website that present my roses (South) is to offer some information about the Old Roses and growing them. I also want to provide a look at the way Old Roses connect with history and Western Culture (that will be in the North West, “Kaleidoscope” section of the site). And of course I am including many photographs for your enjoyment.

I should also say that I am still learning about rose history (a hugely complex subject) and will probably make erroneous statements from time to time. Learning about these amazing plants takes patience, just as growing them does!

Today I was contacted by Ms. Taylor, an After School Care Program teacher, and her Earth Sciences Class with a terrific link to Avas Flowers in MahWah, New Jersey.

Here is the link: Flower Garden Information on Garden Roses

I thank Ms. Taylor and her class for "paying it forward*" and sharing both the love and knowledge of old roses!

*Pay it forward is an expression for describing the beneficiary of a good deed repaying it to others instead of to the original benefactor. The concept is old, but the phrase may have been coined by Lily Hardy Hammond in her 1916 book In the Garden of Delight.