(Excerpted from program notes dated November 21, 2014)
​Bach’s Chaconne for solo violin (it needs no other identification!) is at once so powerful, so profound, and so intriguing that many composers have fallen under its spell. Among them are Brahms, Raff, and Busoni, who transcribed and adapted it for piano (Brahms, for left hand alone), Mendelssohn and Schumann, who transcribed it for violin and piano, and Stokowski who orchestrated it. The Chaconne is the final movement of the second of three partitas (dance suites), each of which has a companion church sonata (with no dance movements), all six for solo violin. The three sonatas are thought to have been completed by 1718 while Bach served in Cöthen (1717-1723). They are remarkable in that Bach wrote out the ornamentation rather than using the traditional symbols for ornaments or leaving the elaboration to the whim of the performer. In 1720 Bach wrote the new partitas and joined them to the sonatas, in fair copy on paper acquired from the Karlsbad region in Germany. His dated title page for the set reads: “Sei Solo. à Violino senza Basso accompagnato”.

Chaconne. Bach’s manuscript (beginning). Dmitrismirnov - Own work, CC BY-SA 4.0, https://commons.wikimedia.org/w/index.php?curid=69519278
A brief word about the baroque violin is in order here for a better understanding of the instrument for which Bach wrote those six works. In general, the violin of his time sounded less bright, perhaps warmer, than that of today’s violin, because the strings then were gut rather than steel, and the tension on them was much less. Further, the bow was arched outward (convex) rather than inward toward the hair (concave), and the tension on the hair was less than in a modern bow. Contrapuntal lines were easier to perform and fuller chords were possible because the arch of the bridge supporting the strings above the face of the violin was lower, which meant that multiple stops of more than two strings were easier to achieve. Delicate, intricate ornaments were easier to produce because the strings were lower against the neck, and the neck was at a lower angle against the body of the violin. All of these elements of the baroque violin facilitated an 18th-century performer’s execution of technically complex works like the Chaconne and allowed for subtle dynamic nuances that complemented the dramatic and rhetorical practices of the time. Today, a violinist using a modern instrument creates a necessarily different, though equally valid, performance of Bach’s music for solo violin. 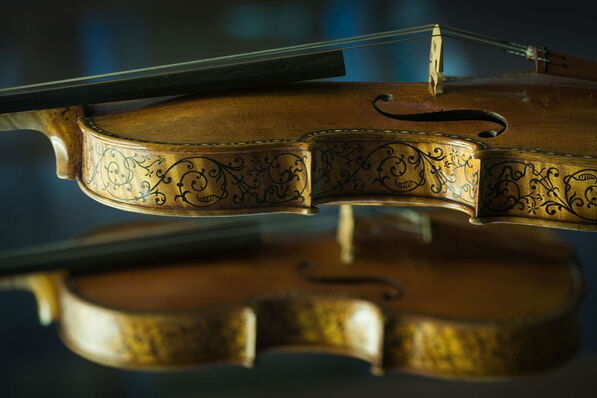 By © Jorge Royan / http://www.royan.com.ar, CC BY-SA 3.0, https://commons.wikimedia.org/w/index.php?curid=23405777
More information about baroque violins: www.TheMonteverdiViolins.org/baroque-violin
What accounts for the fascination with this famous Chaconne? It is a technically very demanding set of 64 events involving several statements of a “theme”, which is a harmonic progression, and variations on it; it’s a sarabande, a triple-meter dance that originated in the Spanish New World but was ultimately banned in Spain for its lascivious nature; and it’s a movement in three sections (D minor, D major, D minor). But it also shows Bach’s frequent use of number symbolism and gematria (number codes referring to letters) in music, his practice of adapting earlier compositions into new works, and his vast store of sacred music from his life-long devotion to God in the service of the Lutheran church. Recent scholars see the Chaconne as a reflection of the heartrending circumstances in which Bach completed the three violin partitas: in early summer 1720 he had accompanied his employer on a three-month long trip to Karlsbad, but upon returning home he learned that his beloved wife of thirteen years, Maria Barbara, had suddenly become ill and died only days earlier. The Chaconne, especially, appears to be deeply expressive of grief. In 1985 Helga Thoene, a violin teacher at the University of Düsseldorf, began presenting remarkable studies that showed a very personal dimension of the six solo violin works. Her Bach tri-centennial conference paper explored number and theological symbols in the solo violin sonatas and partitas. She explained that the three sonatas conform to the three major liturgical feasts of Christianity: Christmas, Easter, and Pentecost, evidenced by chorale quotations embedded in the sonatas, linking them to these feasts. She pointed out that three ancient faith statements are associated with the feasts: “Ex Deo nascitur, in Christo morimur, per Spiritum Sanctum reviviscimus”—“We are born from God, we die in Christ, we are reborn through the Holy Spirit”. The paired sonatas and partitas of the complete set parallel the three statements; the second sonata and its companion partita are thus associated with Easter.
Then, in 1994 Thoene published her study of the Chaconne itself, revealing embedded quotations of Lutheran chorale melodies which, along with number codes in the work, pointed to Bach’s having purposed the music as an elegy for Maria Barbara. Perhaps the title of the set of sonatas and partitas further supports this idea; “Sei solo”, as Bach wrote it, means “You are alone”. Details of Bach’s notation reveal chorale phrases embedded in the Chaconne; many allude to death. In fact, the opening and concluding phrases of the chorale tune “Christ lag in Todesbanden”—“Christ lay in death’s bonds”—are present in slow notes within the Chaconne. Another quote is from the second chorale verse setting in Cantata 4, in which Death has enchained all humanity. Thoene’s analysis shows the Chaconne also contains phrases from other chorales, praising God, expressing faith and trust in God, pleading for help and patience, and more. Besides chorale melodies, Bach also used a well-known device of a descending 4-note motif associated with grief within the music’s texture. The symbolic inner life of the Chaconne is endlessly rich. One would do well to find the recording that explores it: “Morimur”, with The Hilliard Ensemble and Christoph Poppen (EMC), source of the information above on Professor Thoene’s research.