The following essay is excerpted from program notes for a Mozart Program presented at Trinity Cathedral November 20, 2009
​​INTRODUCTION

In mid-January, 1779, Wolfgang Amadeus Mozart (1756-1791) reunited with his father and sister in Salzburg after a separation of a year and three months. The reunion was flawed, however. First, Wolfgang’s mother, who had made the long journey with him, died the previous summer in Paris, and her absence was a bitter pill for the family to swallow. 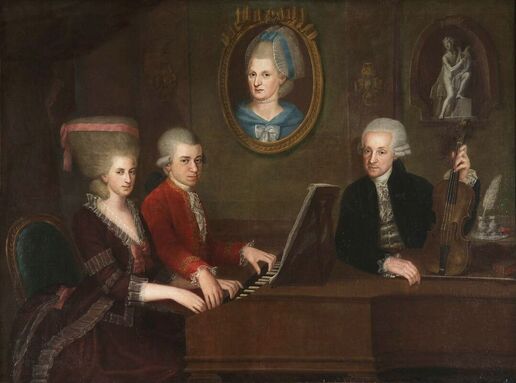 Mozart family c. 1780 (della Croce); the portrait on the wall is of Mozart's mother.
​But also, Wolfgang was returning to take a job he detested in a musical environment that had in every way been superseded in other cities he had visited. Now, as of February 25, he was to be the Court Organist to Archbishop Hieronimous Colloredo and also compose new works for services at the cathedral. And herein lay a good part of the problem: Colloredo, in an effort toward “enlightened” practice, insisted that church music be straight-forward and without musical elaboration that would obscure the text, and that Masses be completed within 45 minutes. Very limited, then, were opportunities for Mozart to try his hand at exploring in works for the church all the new sonic and expressive devices to which he had been exposed, in Mannheim, particularly.

Archbishop Hieronimous Colloredo (Portrait by Johann M. Greiter, ca. 1780)
​What were these novelties from the Mannheimers, whose symphonies were so startlingly different? First, they employed a new single-reed instrument—the clarinet—a Bohemian form of which they brought with them to the court of the Palatinate Elector. Its distinctive sound would become a critical ingredient in Mozart’s operas, serenades, Masonic music, and symphonies in the 1780s. Second, the Mannheim orchestra’s legendary precision and unity of ensemble made effective a new kind of theme—a fast, unison, upward arpeggio known as the “Mannheim rocket” (like the opening of the last movement of the 40th symphony). Third, and especially important, the Mannheimers relished dynamic effects. Sudden changes from loud to soft were bold and arresting. String tremolos (fast repeated notes) that crescendo from piano to fortissimocreated hair-raising excitement and were called the “Mannheim steamroller” (the original use of the term!); equally effective long decrescendos created great suspense. These and other devices in the use of thematic material would find their way into Mozart’s compositions, notably after he moved to Vienna.
​However, now in Salzburg and dealing with his appointment under Colloredo, Mozart threw himself into compositing. Although he wrote some secular instrumental music over the next several months, he almost immediately created several major pieces for the church. Among these were two Masses, K. 317 and 337, two Vespers services, K. 321 and 339, and two church sonatas, K. 328 and 329, along with some shorter sacred works.
​MOZART’S CHURCH SONATAS

Mozart began writing church sonatas when he was sixteen and employed by the new Archbishop of Salzburg, Hieronymous Colloredo. Over the course of his Salzburg career he composed seventeen of these single-movement works. Most of them are for two violins and organ, which were used as interludes in place of sung music after the reading of the epistle, and thus also called “Epistle Sonatas”.
​Mozart composed the sonata in F, K. 244, in April 1776; it is more the norm than others on this program in that it employs only two violins, organ and string bass—a traditional string trio format.
Mozart's Sonata in F, K. 244
Johann Christian Bach Akademie
​The sonata in C, K. 278, from Lent (March or April) of 1777 is expanded beyond the trio format to include oboe, trumpet in C, and timpani; the organ is written as strictly an accompanying instrument with figured bass and no music written out for the manuals.
Mozart's Sonata in C, K. 278
Johann Christian Bach Akademie
​The sonata in C, K. 329, probably from March 1779, right after Mozart’s return from his European trip, is even more expanded with the addition of two horns to the violins, oboe, trumpet and timpani, and a cello is added to the foundation with the string bass. It was probably used within the celebration of the Mass for which Mozart wrote the music known as the “Coronation” Mass, K. 317, after the reading of the Epistle; it will appear at this point in the Mass in our performance tonight. This sonata has a significant organ part, with written-out music for the manuals that goes well beyond mere chord construction by actually presenting thematic material. The pedal part, too, is not just harmonic foundation but presents high-profile thematic material. The string bass is separated out from the organ bass and occasionally functions in duet with the cello, apart from the organ pedal part.
Mozart's Sonata in C, K. 329
​Vienna Radio Symphony Orchestra, Bertrand de Billy, conductor
Vienna Boys' Choir | Sandrine Piau | Chorus Viennensis
The sonata in C, K. 336, from March 1780, is the last in this genre that Mozart wrote. This is closer to a quartet in the manner in which the instruments are used: along with the two violins the organ has music written out for manuals and pedals as well as figured bass in places The string bass collaborates at times with the organ, but when there is thematic information for the organ and the violins are providing accompanying figures, the string bass supports them instead. The organ part in this sonata is the most elaborate of all the church sonatas. In it, Mozart approaches some of the style of his keyboard sonatas, with much scale passagework and ornamentation; one might think of this being as close as he would get to an organ concerto.
Mozart's Sonata in C, K. 336
Johann Christian Bach Akademie
By Judith Eckelmeyer © 2009