BEETHOVEN: SYMPHONY NO. 5 in C-MINOR, OP.67
​by Judith Eckelmeyer 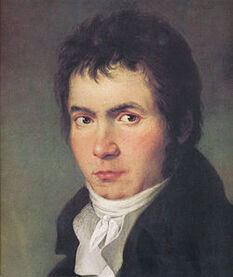 Beethoven in 1804, the year he began work on the Fifth Symphony; detail of a portrait by W. J. Mähler
Ludwig van Beethoven (1770-1827) arrived in Vienna in 1792 to make his home and career there. He had “inherited” the common language of the “Viennese School”—Mozart and Haydn—when he began composing in his hometown, Bonn. It was not surprising, then, that he continued the style when he continued composing in that great music capital, albeit with supplemental training in counterpoint. At first he worked with Joseph Haydn, the most famous composer in the world at the time, and later, after a rift with Haydn, with Johann Georg Albrechtsberger. By the turn of the century, he had achieved support of aristocratic admirers and compositional success primarily through his piano sonatas and chamber music.
Just after 1800, he became aware of increasing problems with his hearing. He was 31. The impact on his life was profound, and without question influenced his compositions. He began to reckon with it in writing with a famous letter, the “Heiligenstadt Testament”, to his brother in 1802, describing his despair at not being able to hear sounds of nature in his walks in this suburb of Vienna, his isolation from society, his increasing loneliness; only his dedication to “his art” and his determination to continue composing prevented him from ending his life. Later he would tell his friend, secretary and biographer Anton Schindler, that he thought of the famous 4-note rhythm so prominent in the fifth symphony as “fate knocking at the door”. Beethoven’s struggle with his deafness affected his work from the third symphony on, and the ominous rhythm is evident in numerous works of the middle and late periods of his composition. 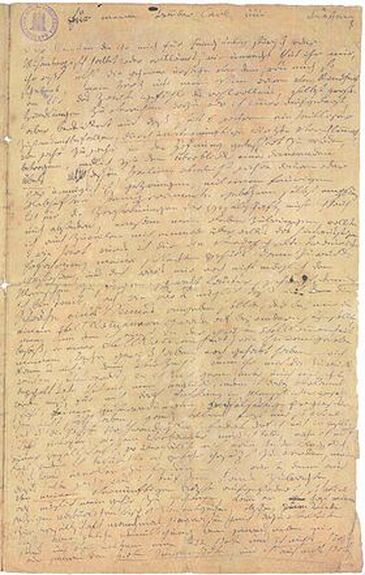 A facsimile of the Heiligenstadt Testament
Beethoven’s Symphony No. 5 is arguably the best-known classical work in the western world. However, recognizing the subtleties in the work, informed by an understanding of Beethoven’s personal struggle at the time he wrote it, we might hear it in a very different way from our experience as casual listeners. I believe it is an autobiographical statement, a kind of translation of the “Heiligenstadt Testament” into untexted sound, setting it at the very edge of “program” music
Before hearing the work again, we should note several things. First, the “normal” structure of two of the movements of the symphony in Beethoven’s time, and then some features that Beethoven introduced (some for the first time) in this symphony. 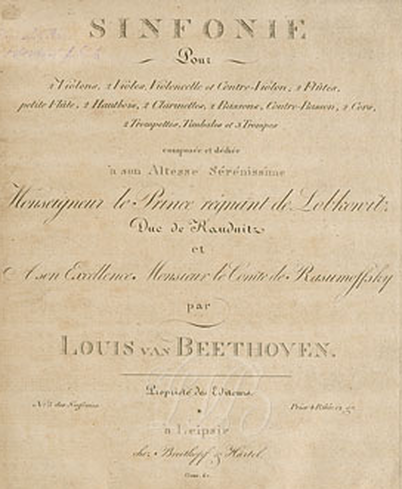 Cover of the symphony, with the dedication to Prince J. F. M. Lobkowitz and Count Rasumovsky
Structure:
First Movement: Called erroneously “first movement or sonata-allegro form”, it is none of the above! It doesn’t belong just to the sonata, it’s not always in an allegro tempo, nor relegated only to the first movement, and it’s not a pre-cast form into which music is poured but rather a process for treating musical materials. There are three “events”: an exposition of thematic material in 2 parts, first in the home key then in a contrasting key; a development of the theme(s) in any number of ways and varied keys, ending in a harmonic “door” back to the home key, where the original themes are presented again, ending in the original key.
​
Dance Movement (minuet or scherzo, often the 3rd movement): There are really 2 dances, the primary minuet or scherzo followed by a “trio”, a lighter dance in a related key (originally played by fewer instruments). Both dances are structured in the same way: Part A, establishing a key and usually moving out of the key, then repeated; Part B, starting in Part A’s new key and returning to the original key, often with at least some of the theme from Part A, and then repeated.  After the first dance, the second dance is presented, in the same organization as the first dance. Then, the entire first dance is given again, as written, but usually performed without the repeats of the 2 sections.