(Excerpted from the Good Friday Concert at Trinity Cathedral, Cleveland, OH on April 18, 2014)

Unknown photographer - "Maurice Duruflé 1902-1986; The Last Impresssionist" edited by Ronald Ebrecht
​​Maurice Duruflé (1902-1986) was born into a devout family in Louviers, near Rouen, where his foundation of ties with the organ, the church and its liturgy was established. Playing the family harmonium as a child of six opened his interest in the organ, which he began to study in earnest from the age of 10 at the choir school of Rouen Cathedral.
​There as a choirboy he also became formally educated in plainchant—a fact that must lead us on a short tangent:
​
Plainsong, or plainchant, had been the sung vehicle for the liturgy of the Roman Catholic church since the fifth and sixth centuries. A body of integrated Gallican and Roman chant became known as Gregorian chant, named for Pope Gregory the Great (r. 590-604), who had promoted the development of a body of chants for the church. Over the centuries various additions and modifications, along with notational systems to enable easy memorization of the vast literature, affected this repertory, even leading to significant alterations of the Gothic melodies; but the bones of Gregorian chant remained in place as the church’s musical language. In France, the Revolution beginning in 1789 secularized that country, effectively destroying not only the power of the clergy but also generally removing the practice of singing the liturgy. A few pockets remained where the chant was retained, but it was used in greatly simplified ways, sung with chordal major or minor harmony in stodgy rhythms. (An excellent discussion of this style may be found in James Frazier’s “In the Gregorian Mode” and Jeffrey Reynolds’s “On Clouds of Incense” in Maurice Duruflé, 1902-1986: The Last Impressionist, ed. Ronald Ebrecht, 2002.)
​​​In the 1830s, Benedictine monks in the Abbey at Solesmes, southwest of Paris, began a huge project of restoring the chants to their original notation of rhythm and pitches—as far as could be determined—and working out a performance practice to sing the liturgy as they thought it originally had been sung. No longer were the chants harmonized, but sung in unison, with notes rhythmically grouped in twos or threes, conforming to the flow of the text. Further, instead of using major or minor scales, the chants’ melodies were in their original ancient modes. Louis Niedermayer, in 1855, and music historian Maurice Emmanuel, in 1913, built on the monks’ work by developing methods of modal accompaniment for the chant. 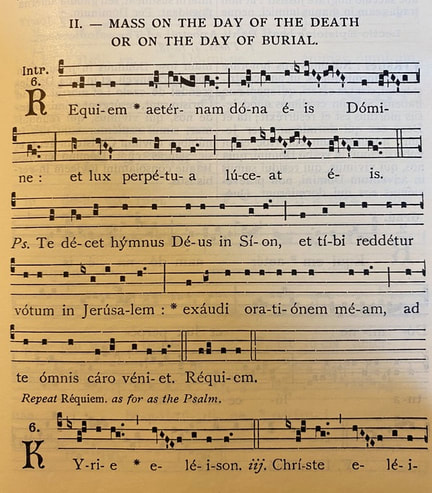 The impact of the Solesmes monks’ work was so great as to inspire the establishment of the Scola Cantorum in 1894, and later the Institut grégorien de Paris, for training singers in this reformed style, and to further the development of church music and organ repertoire inspired by Gregorian chant and the polyphonic style of Palestrina. After several stages of refinement, reliable editions of the liturgy were published in the early 20th century. The effects of these reforms spread to French churches and schools with increasing intensity, and by the third decade of the 20th century many French composers were using both melodies and modal sounds of plainchant as serious components in their works.
​Duruflé’s youthful training in plainchant in Rouen occurred in the context of the Solesmes movement. As will be apparent, this training was of paramount importance for Duruflé’s entire compositional career.
​At age 17 Duruflé moved to Paris where he studied organ privately with Charles Tournemire, the organist at Sainte Clotilde, then with Louis Vierne at Notre Dame Cathedral, where he soon became Vierne’s assistant. A year later he entered Eugène Gigout’s organ class at the Paris Conservatoire, where he studied harmony and composition as well. (Among his colleagues in Paul Dukas’s harmony class was Olivier Messiaen, another composer whose sacred works would make an impact in the 20th century.) He distinguished himself with five “first prizes”, including in organ and composition, and other awards. By 1930 he was organist of the church of Sainte Étienne du Mont, and in 1943 became professor of harmony at the Conservatoire, and also taught organ there. He established himself as a superb organist as well as a teacher and composer. He became widely recognized in these spheres, even serving as the soloist for the premiere of the Organ Concerto by his contemporary, Francis Poulenc, in 1939.
​Among Duruflé’s students was a brilliant organist, Marie-Madeleine Chevalier, whom he married in 1955. Maurice, and later he and Marie-Madeleine, had a highly successful concert career, travelling to England, Europe, Russia, and North Africa to give organ recitals. During five tours of North America Maurice conducted his increasingly popular Requiem, and he and Marie-Madeleine performed organ works to great acclaim. However, in 1975 the Duruflés were seriously injured in an automobile accident which ended Maurice’s concert career and limited Marie-Madeleine’s for a time; she recovered well enough that, after Maurice’s death in 1986, she was able to undertake successful tours and return again to the United States to perform and teach. Deteriorating health resulting from the auto accident increasingly weakened her, however, and she died in 1999. 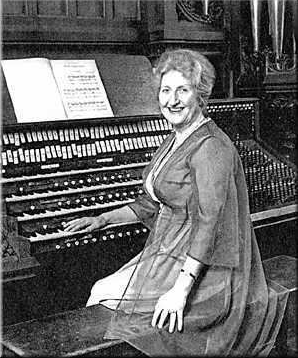 Marie-Madeleine Chevalier
​Maurice Duruflé’s compositions are not numerous, but they are held in great esteem. The gem among them is the Requiem, Op. 9, dedicated to his father; it was given both a radio and a concert premiere in 1949 and quickly became a worldwide favorite. As mentioned earlier, performing plainchant in the Solesmes manner became as fundamental as breathing in Duruflé’s work as a church musician; it was a key ingredient in his compositional style. Just after his father’s death, he was working on a suite of organ pieces based on the plainchant of the Requiem Mass when the publisher Durand commissioned what became his Requiem. The completed work is for a mixed four-voice choir with soprano and baritone soloists (or choir section) and full orchestra; Duruflé also prepared a version with a reduced orchestra and organ accompaniment, as well as a version for organ alone. This evening’s performance uses organ and a reduced orchestra consisting of strings, timpani, three trumpets, and harp.

Duruflé’s Requiem is structured with the same movements as Fauré’s Requiem of some 50 years earlier, and has the same sense of peace and calm as Fauré’s. Both omit the doom-threatening “Dies irae” that is so strongly to the fore in both Mozart’s and Verdi’s Requiems, but both Fauré and Duruflé introduce turmoil in the “Libera me” movement. But, as he said himself, Duruflé’s work is not dependent on Fauré’s, for unlike Fauré, Duruflé constructed his movements on the liturgical chants that can be found in the Liber Usualis. The chants—and plainchant performing style—are integral to and recognizable in Duruflé’s work; he said he sought to “reconcile” the plainchant rhythms with the “exigencies” of modern metrical beats. However, the chants are not slavishly employed. They occasionally appear in different pitch ranges throughout a movement, suggesting traditional modulation techniques between sections; they are sung in chant-like unisons, or harmonized in the choral voices, or form the subject of a fugue section, as in the Kyrie. There are also occasional departures from plainchant. Nevertheless, Duruflé’s melodies live primarily in plainchant, and he created an instrumental accompaniment that supports the modality and free-flowing lines of these melodies. The harmonic language of the Requiem is quite mixed, at turns using the old medieval church modes or the classical major/minor tonal system. (Those interested should devour Jeffrey Reynolds’s analysis in “On Clouds of Incense”.) Harmonies are built of extended and often unresolved chords, a style Duruflé absorbed from Debussy’s music. Perhaps the most amazing effect appears at the very last chord, a gentle reminder of the meaning of the text.
​Personal Afterword: It has been a rare treat to talk with Karen Holtkamp, of the Trinity community, about her own experiences with Maurice and Marie-Madeleine Duruflé. Her stories and comments allow us a special glimpse of the two.

Before she was married to Walter Holtkamp, Karen McFarlane became the Duruflés’ agent after the death in 1976 of their original agent, Lilian Murtagh. She has vivid and fond memories of her long association with both Maurice and Marie-Madeleine. Mrs. Holtkamp enjoyed the Duruflés tremendously, saying that they were fun to be with and had a very happy relationship. She described Marie-Madeleine as having an outgoing personality and a rich sense of humor, complementing Maurice’s quieter, more introspective personality. 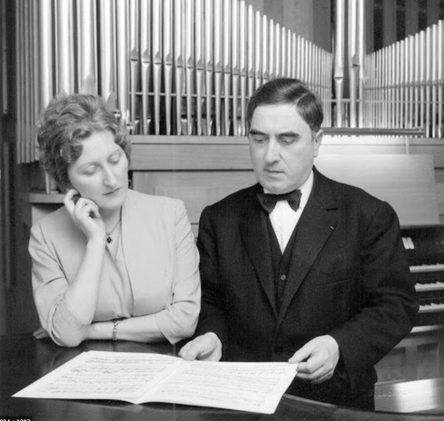 Marie-Madeleine also adored cats. Mrs. Holtkamp recalls that in 1969, having just flown in to New York from Paris, the Duruflés were met by Fred Swann, organist at the Riverside Church. Fred later told Karen that almost the first thing Marie-Madeleine did was to ask after Karen’s cat Alleluya. Fred had to tell her that Alleluya was “defunct”. Turning to her husband, Marie-Madeleine exclaimed, “Oh, Maurice, you must write un petit requiem pour Alleluya!”

Our thanks to Mrs. Holtkamp for sharing these memories.

I. Introit: Requiem Aeternam
Give them eternal rest, Lord, and may perpetual light shine on them.
A hymn to you is fitting, O God, in Sion, and to you offerings are rendered in Jerusalem.

III. Offertory: Domine Jesu Christe
O Lord Jesus Christ, King of glory, deliver the souls of all the faithful departed from infernal suffering, and from the deep abyss; deliver them from the lion’s mouth, that the underworld not devour them, that they not sink into darkness. But let the standard-bearer Saint Michael represent them in holy light, as once you promised Abraham and his seed. Sacrifices and prayers of praise we offer you, Lord; receive them for those we remember today; cause them, Lord, to cross over from death to life.

V. Pie Jesu (from the Sequence)
Holy Lord Jesus, give them rest. Give them eternal rest.

VI. Agnus Dei
Lamb of God, who takes away the sins of the world, give them eternal rest.

IX. Antiphon (Burial Service): In Paradisum
May the angels lead you into Paradise; may the martyrs receive you at your arrival and lead you into the holy city Jerusalem. May the choir of angels receive you, and may you, with the one-time pauper Lazarus, have eternal rest.
Duruflé Requiem, Op. 9 I. Introit and Kyrie
Maurice Duruflé, conductor
​Hélene Bouvier, mezzo-soprano | Xavier Depraz, bass | Marie-Madeleine Duruflé-Chevalier, organ | Philippe Caillard and Stéphanie Caillat Chorales | Orchestra des Concerts Lamoureux