MOZART'S MAGIC FLUTE:
Freemasons and Rosicrucians
by Judith A. Eckelmeyer
​Note: The following material is amplified in the "Magic Flute" Overview essay.

1. The Magic Flute was written and first performed in Vienna during summer and early fall, 1791, about two months before its composer, Wolfgang Amadeus Mozart, died. 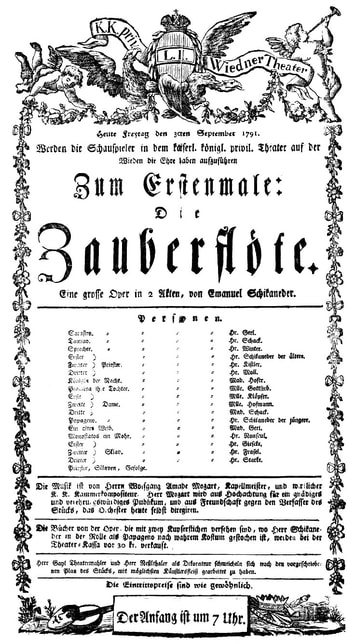 Playbill for The Magic Flute premiere in 1791.
​2. Freemasonry in Austria was in its heyday from about 1780 till the end of 1785. The enlightened Emperor Joseph II, sole ruler Austria 1780-1790, had been tolerant of Masonry; the fraternity thrived during the first five years of his sole rule. The Grand Master of Austria and Master of the lodge Zur wahren Eintracht (True Harmony) was the eminent metallurgist, Ignaz von Born, whom some would later consider to be the model for Sarastro in The Magic Flute. A mark of the fraternity’s strength was its status as a National Lodge, independent of outside governance. Von Born was, besides a Mason, a member of the Illuminati—distinctly rejecting supersition, astrology, religion, and mysticism. 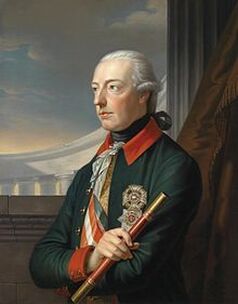 Emperor Joseph II (Portrait by Carl von Sales)
​3. By 1783, Joseph II closed religious orders in Austria as part of his Enlightenment (anti-superstition) mode of rule. In early 1785 an incident of a false rumor attributed to Freemasons impelled him to seek an accounting of “good” vs. “false” Masons by means of police supervision. During the year infighting among leaders of masonry led to power struggles, which led to intrigues, and all this finally reached the ear of the Emperor. Joseph then ordered limitations on the number of Masonic lodges and restrictions on its activities as of the beginning of 1786. In the wake of the edict, only three lodges remained, and of these two were formed by combining previously–existing lodges.  In July 1786, Ignaz von Born left his position as Master of the Lodge and retired from active participation in Masonry. His lodge officially closed the following year. 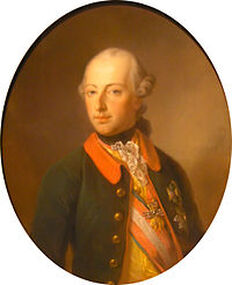 Portrait of Joseph II by Georg Decker.
​4. With the Masonic lodges much reduced in numbers and influence, and unable as a National Lodge to connect with active Masonic lodges in other countries, many masons turned to other organizations, primarily the Order of Asian Brethren. This group was seriously interested in esoteric matters, including alchemy and number symbolism (numerology and gematria). It is possible that through association with this order Mozart became acquainted with the work of Friederick Christoph Oetinger (about whom more later). 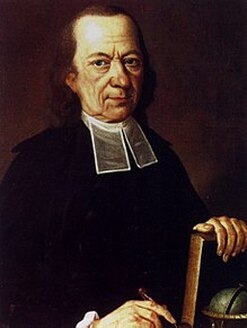 Friederick Christoph Oetinger 1775
​5. In  1789 in France, Joseph’s sister, Marie Antoinette, and her husband Louis XVI had been violently removed from power at the beginning of the Revolution. 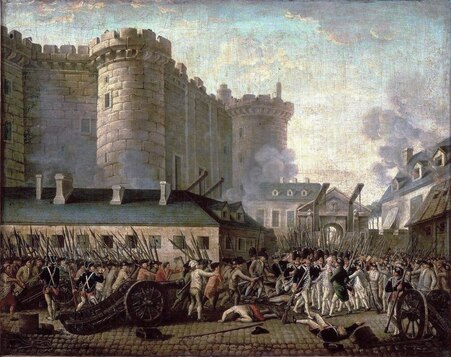 Storming of the Bastille and arrest of Governor Bernard-René de Launay, 14 July 1789.
​6. Joseph II died 1790; his more conservative brother Leopold II became both Holy Roman Emperor and Emperor of Austria, ruling from Vienna. By 1791, because of Joseph’s death and further restrictions placed on the fraternity, Masons in Austria had become largely inactive. Also in 1791, Ignaz von Born died, further darkening the Masonic scene in Austria.
​SOCIETIES AND FRATERNITIES IN 18th-CENTURY VIENNA:

1. Freemasonry: ​hugely active into the mid-1780s. We should remember that several strains of Freemasonry were active at the time, for example “English” system Blue Lodge Masonry and German “Strict Observance” Masonry. Membership lists included aristocrats, government officials and statesmen, artisans and craftsmen, clergy, literary figures, publishers, artists of all media, scientists, intellectual leaders, and many others. 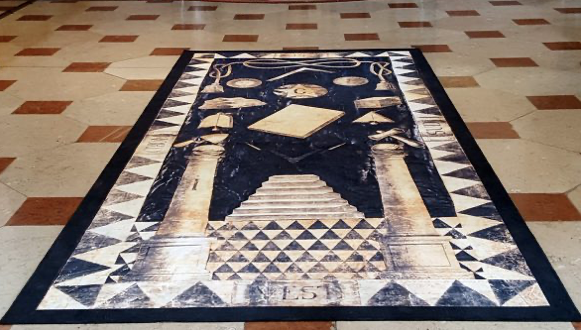 The ritual carpet tapis (around 1780) – in the early years of Freemasonry, symbols of the lodge were drawn on the floor in chalk and charcoal. Later, they started to use a waxed canvas rolled up in the middle of the lodge between three lamps – representations of beauty, strength and wisdom. The carpet is also covered with many Masonic symbols.
​​Until the restrictions of 1785-6 were applied, there were 8 lodges in Vienna. Zur wahren Eintracht (True Harmony), led by Ignaz von Born, established a kind of Enlightenment scientific academy at which members presented the results of their research into historical and scientific matters. Mozart, a member of Zur Wohltätigkeit (Beneficence) and, after the reorganization of lodges in 1785, of Zur neugekrönten Hoffnung (New-Crowned Hope), knew the members of True Harmony and visited that lodge on occasion. N. B.: Irmen thinks it “highly plausible” that women’s lodges existed in Vienna since 1780; these were “adoption lodges” modeled on French lodges. 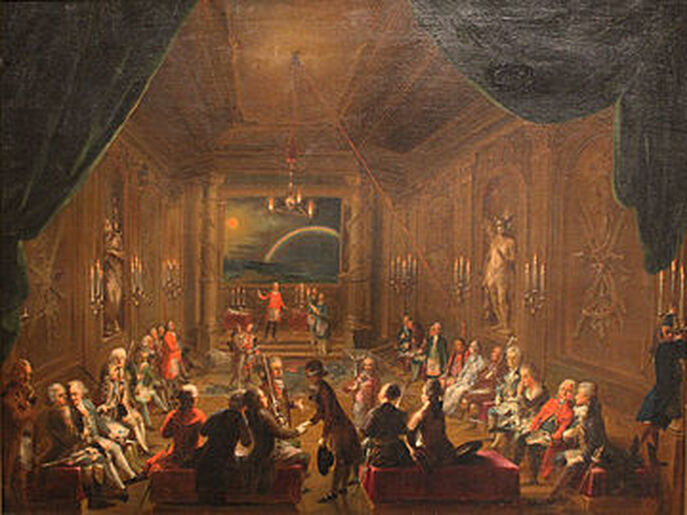 A Masonic lodge meeting of Mozart's day, once thought to portray Mozart's own lodge. Anonymous. Oil painting (1789), Wienmuseum Vienna.
​2. Illuminati: the most politically and socially radical of the “secret” societies of the time, striving for Enlightenment ideals in social and governmental spheres. They rejected superstition, esotericism, alchemy, and so on. Von Born was a leading member. 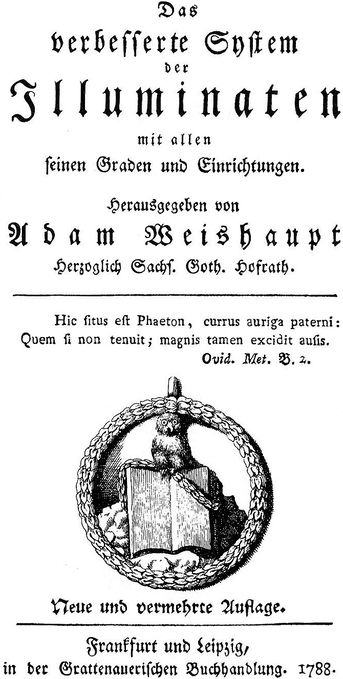 The Owl of Minerva perched on a book was an emblem used by the Bavarian Illuminati in their "Minerval" degree.
​3. Rosicrucians (The New Order of the Gold and Rosy Cross), who were largely interested in hermetic symbolism particularly expressed in alchemy. Members included major figures in Vienna who were also Masons, and with whom Mozart was closely associated: Johann Joseph Anton Count Thun, a member of True Harmony lodge; Otto von Gemmingen, master of Mozart’s lodge Beneficence; and Baron Gottfried van Swieten, among others.
​N.B.: The original 17th-century Rosicrucian movement had as its goal the “universal and general reformation of the whole wide world”, blending theology in alchemical symbolism with the early stages of empirical science and a huge emphasis on learning.
​4. Asian Brethren (Asiatic Brethren, the Order of Knights and Brethren of St. John the Evangelist from Asia in Europe): interest in theology and alchemical-magical mixture of Christian and Jewish mystical ideas, taking the alchemical symbolism and teachings of the Rosicrucians. Numerical mysticism was highly developed in their practices. Among the sources of their teachings are 16th-17th-century hermetic writers Jacob Böhme, Paracelsus, and 18th-century French theosophist Louis Claude de Saint-Martin, all of whom incorporated cabalistic and Christian mysticism into their thinking. Count Joseph Thun was a member before joining the New-Crowned Hope lodge in 1789. (Irmen)
​5. Grotto: Mozart and his friend, the clarinetist Anton Stadler, were said by Constanza to be planning a new society. The plan never came to fruition, as Mozart died before it could be achieved and Stadler never persued it. 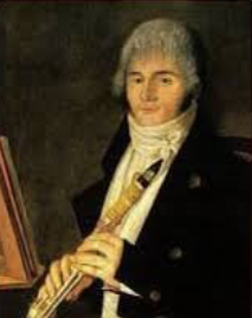 Anton Stadler
​FREEMASONRY
Ignaz von Born: Master of his lodge Zur wahren Eintracht (True Harmony) and Grand Master of Austrian lodges in early-mid 1780s. Founder of Journal für Freymaurer and author of a number of articles for it. He was so strong a presence in Viennese freemasonry that some considered him the model for Sarastro. 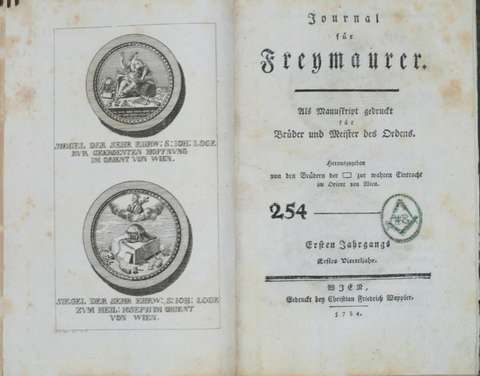 Journal für Freymaurer 1784.
Almost every one of the men associated with Mozart and the preparation and production of the opera were masons. 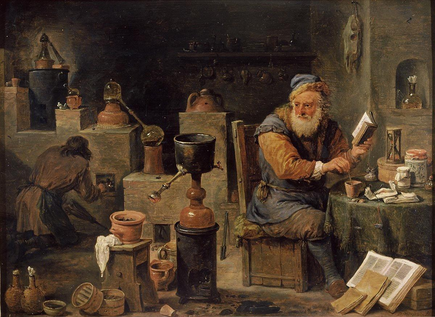 The alchemist, c. 1650, oil on panel
Alchemy is a significant contributor to the development of modern chemistry, and was a philosophical, theological, and practical endeavor prior to the 18th century. Seventeenth-century Rosicrucian writings and the 18th-century Rosicrucians were steeped in alchemical symbolism and language.

Carl Ludwig Giesecke (Georg Metzler), student of von Born in Hungary, then a member of the theater community in Vienna before going to Denmark, Greenland and finally Dublin to build his career as a highly respected mineralogist and professor of mineralogy.

For a modern perspective on Masonry check out "Loge Liberté chéie: Light in the Darkness" by Alexander P. Herbert 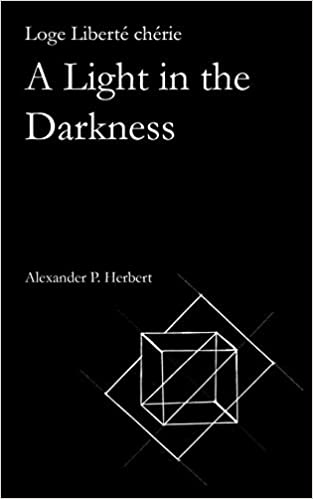