The Cleveland Museum of Art

Mozart completed his only trio for viola, clarinet, and piano, K. 498, on August 5, 1786. It is a delightfully cheerful work, following a series of equally vivacious compositions such as the string quartet in E-flat, K. 493; the concerto in E-flat for horn and orchestra, K. 495; a piano, violin, and cello trio in G, K. 496; a suite of duets for two wind instruments; and that crown jewel, The Marriage of Figaro, which had been so successful that the demand for encores impelled the Emperor Joseph II to prohibit repetition of solo arias in stage works and so "prevent the excessive duration of the operas." Riding on this crest, Mozart wrote a number of lighthearted smaller works for close friends. The mixed trio in E-flat, K. 498, was originally written for Anton Stadler, the acclaimed clarinetist in the "actual service" of the emperor and an artist who was to remain a friend and an inspiration for Mozart's late clarinet works, and Franziska von Jacquin, Mozart's talented piano pupil and the sister of his friend Gottfried von Jacquin. Mozart wrote himself into the trio as the violist.
This trio acquired the nickname "Kegelstatt" sometime after its composition. "Kegelstatt" means "skittles alley" or, in more familiar (if not technically accurate) terms, "bowling alley." The story, unsubstantiated in hard fact, is that Mozart composed the work while engaged in a game of skittles or ninepins. Biographers such as John Burke take a conservative, dim view of the likelihood that even Mozart would have been able to produce this little gem in such an environment. However, I would postulate that, if he did not literally compose the work there, Mozart may well have used some of his (probably extensive) skittles-alley experience in composing it elsewhere, and that not only the organization but also the content of the trio have characteristics that make this a plausible theory. Let us imagine and consider...
The trio is set up in three movements: a modified sonata-form andante, a menuetto in B-flat with its trio in G minor; and a rondo, again in E-flat. The rondo, with internal repeats, is by far the longest at 222 measures (not counting the repeats) against the 158 written-out measures (without repeats) of the second movement or the 129 measures of the first. In point of fact, there are no written repeats in the first movement: the exposition ends with a struck suspension; its resolution is followed by a fermata over almost half a bar of rests, ad the development-recapitulation is not given a repeat indication. However, the second movement with repeats as indicated for the minuet and trio yields 398 measures, and the third movement with repeats yields only 268. while this does not reflect actual elapsed time of performance, it does suggest an interesting design: namely, that the second movement has been given the greatest physical or numerical dimension of the work. Furthermore, the trio in the second movement is 117 measures of writing, or 234 with repeats, against the minuet's 41 measures or 82 with repeats. This makes the trio the dominant section in the longest movement.

Is this merely "bar tending?" Let us consider further...

The game of skittles lays out nine wooden "pins" in a diamond shape, thus:
​ 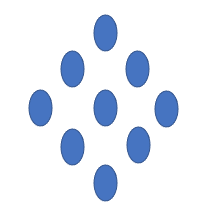 To read online scroll down using mouse over document.
Note the blank area on cover page- keep scrolling!
​To download use downward facing arrow on lower right side.