​The Mass in C, K. 317, is nicknamed the “Coronation” Mass. Mozart completed it probably on March 23, 1779, for use on Easter Sunday, April 4. The nickname for this mass was a puzzle for over a century until in 1907 Johann Evangelist Engl proposed that Mozart had composed it for the ceremony of the crowning of the image of the Virgin Mary at the pilgrimage church at Maria Plain, just outside Salzburg. However, after further research published in 1963, this explanation has been discounted, and many solid reasons have been cited then and since to indicate that the mass received its nickname from the fact that it was performed under the direction of Antonio Salieri at the coronation of Leopold II as the new Holy Roman Emperor in 1790 and King of Bohemia in 1791, and again, after his unexpected early death, for the coronation of his successor, Francis II, as Holy Roman Emperor in 1792. Dennis Pajot points out that the title “Mass in C for the Coronation Celebration of His Majesty Francis I as Emperor of Austria” was applied to a copy of the performance parts at the Austrian National Library in 1820, and apparently the name became attached to it thereafter.
​Mozart planned a festive work in the “Coronation” Mass. It requires two each of oboes, horns, and trumpets, two violin parts, string basses, timpani, and organ; soprano, alto, tenor and bass soloists; and a four-part choir. (Three trombones also in the score are used to support the lower three choral voices.) In setting the five “ordinary” sections of the Mass, however, Mozart achieved not only Archbishop Colloredo’s required brevity but also a unity and relatedness between the sections. For instance, the opening of the Kyrie, Gloria, and Credo are alike in their strongly uneven rhythms, in spite of tempo and metrical differences. In an even stronger link between movements, the soloists’ material of the Kyrie movement reappears in the fifth section, at the words “Dona nobis pacem”. And throughout the Mass, melodic gestures of similar construction resonate as from one general concept. 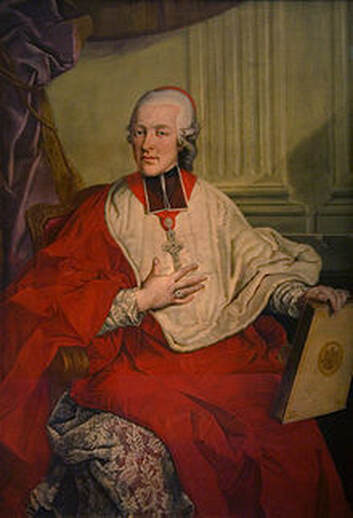 His Grace Archbishop Hieronymus von Colloredo. Portrait by Johann M. Greiter, ca. 1780
A few words about each of the sections may serve to bring the listener’s attention to Mozart’s special treatment of the text.

Kyrie eleison: Although the full text of the section is present, Mozart concentrates on the Kyrie eleison, relegating the Christe eleison to a few brief phrases in the middle of the movement. The slow, dotted opening (Andante maestoso) by the choir suggests a French Overture and royal ceremony. The arresting opening forte and sudden drop to piano on the word “Kyrie” occurs against a crescendo marked for the orchestra—a miniature moment of drama thanks to the Mannheimers’ dynamic devices. Soloists continue the Kyrie with a new theme (which will reappear in the last movement), and in the midst of this more extended section the brief Christe occurs. The chorus completes the movement with the return of the slow theme that opened the movement.

Gloria: The long text is shared between choral and soloists’ statements at a vigorous pace. Primarily in C major, the movement has occasional minor-key moments at key phrases: “qui tollis peccata mundi, Miserere nobis”, and “suscipe deprecationem nostram”. One hopes the Archbishop forgave the few passages of contrapuntal working, as the text is still clear in the well-separated soprano line. A few instances of word-painting can be detected, for example at “tu solus altissimus”.

Credo: A very march-like attitude pervades the movement, beginning with a decisive and forceful rhythm on one note in the unison voices against an energy-filled orchestra accompaniment. (This theme returns several times, forming a rondo structure.) Mozart explores the dramatic potential of the text by using the Mannheim dynamics and surprising off-beat rhythms which drive the music forward, and there is plenty of word-painting. At the words “Et incarnatus est” the movement’s energy changes radically, as a new tempo, greater harmonic intensity, and more delicate accompanying figure change the atmosphere. Soloists present this most intimate text quite tenderly, and the subsequent chorus outburst at “Crucifixus” begins a section of increasing tension that is released only at “sepultus est.” Mozart uses those Mannheim dynamics to great effect here. Note the word-painting as Christ is entombed. (One might put this passionate section into the context of Mozart’s very recent experience of losing the woman from whom he was born, and who was buried in Paris, far away from her family.) The fast tempo returns at “Et resurrexit”. The extended Amen passage at the end of the movement seems to be a sly trick on the Archbishop, for it isn’t really the end: Mozart begins the Credo text again briefly before coming around again to two really terse amens.

Sanctus: This is another Andante maestoso movement, in triple meter, with the regal dotted rhythms of the French Overture, leading to the quite fast and dance-like Osanna.

Benedictus: Although the Benedictus is usually subsumed under the Sanctus in enumerating the “ordinary” sections of the mass, traditionally in Mozart’s time the Benedictus and its Osanna were separated from the Sanctus to be presented after the consecration of the Host. The tempo is  a moderate Allegretto duple meter, and the heavier instruments of the orchestra are silent here, leaving only a delicate staccato Alberti-bass accompaniment in the violins and a simple bass line to introduce the solo quartet, where the oboes and horns also gently enter. The chorus returns at its fast triple meter to repeat the Osanna. But—perhaps to surprise the Archbishop—this Osanna is not the end! Once again the solo quartet brings a reprise of their Benedictus, and only after this does the chorus provide a closing Osanna.

Agnus Dei: Mozart rebalances the normal three part structure of the Agnus Dei section so that the first two statements “Agnus Dei, qui tollis peccata mundi, miserere nobis” fall to the soprano soloist alone, and the third statement, “Agnus Dei, qui tollis peccata mundi, dona nobis pacem” is presented first by the soprano then shared by the soloists and the choir. The soprano soloist’s Agnus Dei is one of the major marvels of Mozart’s pre-Vienna career. Her melody, beginning so like the Countess’s “Dove sono” of some seven years later, is infinitely expressive in the current “sensitive” style, yet beautifully rococo with tasteful ornaments and flowing lines. The orchestra’s violins are muted over the pizzicato bass. Subtle but expressive dynamics of Mannheim origin support exquisite harmonic changes. The remarkable bubble bursts with the shift into the faster and more cheerful segment, “dona nobis pacem”, introduced by the soloists and extended with interplay between choir and solo ensembles; the orchestra returns to full brilliance for this section. Far from a perfunctory statement, the “dona nobis pacem” is full of lively rhythms and surprises at almost every turn—Mozart stretching the boundaries.
By Judith Eckelmeyer © 2009