KEY STRUCTURE IN THE MAGIC FLUTE

​As I have discussed in the Overview essay on The Magic Flute in this Magic Flute (North) section of the website, there is a remarkable cohesion of musical structure in this opera. This cohesion can be found in recurrences within Mozart’s melodies and also in the progression of key centers in the work. Melodic relationships were the subject of my dissertation, Recurrent Melodic Structures and Libretto Continuity in Mozart’s “Die Zauberflöte”; there is also substantial discussion of several of them in my article “Two Complexes of recurrent Melodies related to Die Zauberflöte” in The Music Review 41, No. 1 (1980). Unfortunately, I will not be able to bring examples of such relationships into this website at the present.

Key structure, however, is an important element of the opera’s cohesion. Two unique features of the key progression are evident here. The first feature is that the keys are grouped in relation to scenes of the story, or the drama, so as to coincide with major changes that occur in the unfolding of the plot. As one looks at the overall plot and the keys appearing in relation to it, one can see the formation of a musical construct called “sonata-allegro form”. This misleading term refers to the procedure by which late 18th- and 19th-century composers presented and worked out musical topics within a movement, and can be found not only in sonatas but also symphonies, concertos, overtures, and other extended compositions; further, the procedure need not be at the tempo “allegro”. Using this procedure, the composer establishes a key center by presenting one or more topics (theme), then departs from that “home” key to a related key, often giving one or more themes before coming to a temporary halting point (cadence). This first section is called the Exposition. Next, the composer uses one theme (or more) in a variety of ways in different keys often well away from the “home” key; but ultimately the music arrives at a harmony that sets up a distinct expectation of the reappearance of the “home” key. This wandering, exploratory section is called the Development. With the return to the “home” key, the original musical themes also reappear, but with the difference that the theme(s) originally given in the secondary key now occur in the “home” key; this relocation of the themes changes the aural range, possibly the mode (major/minor), and thus the sound of the themes, sometimes in surprisingly significant ways. This final section is the Recapitulation.

The following diagram shows the Sonata-Allegro layout of the keys of the Magic Flute in relation to large events in the opera. Missing scene numbers mark scenes with spoken dialog.
ACT I

DEVELOPMENT: The primary testing of the candidates

RECAPITULATION: Final testing of the candidates and their success; the union of Tamino and Pamina, and Papageno and Papagena

*Silence is called for in the libretto but is not in Mozart’s score. 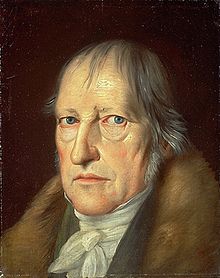 Georg Wilhelm Hegel - Portrait by Jakob Schlesinger, 1831
The second unique feature of the key relationships in their progression as sonata-allgero structure is that they show the plot conforming to the construct of the so-called Hegelian dialectic: Thesis, Antithesis, Synthesis. Georg Wilhelm Hegel (1779-1831) expounded his dialectic theory in his Wissenschaft der Logic, published over 20 years after Mozart’s wrote The Magic Flute. The concept, however, had existed since the time of Aristotle and Heraclitus. In Mozart’s time it appeared in works of Herder, Lessing and Goethe and was reflected in contemporary writings on the nature of progress and evolution in history, religion, and social institutions. The theory proposes a primary state (thesis) countered by a contrasting state or polar opposite state (antithesis); the struggle between the two produces a resolution into a new state embodying the best of both (synthesis). This synthesis then becomes the thesis for another step forward using the same procedure. In The Magic Flute, the Thesis is formed by the music in Act I framed by the key of E-flat; this part of the plot is governed or influenced by the Queen of the Night. The Antithesis is formed by the music in Act I framed by the key of C major, which occurs in Sarastro’s sphere of influence and in his realm. All of Act II is the Synthesis; here the true nature of the governing characters Sarastro and the Queen of the Night becomes crystal clear, and the candidates undergo their trials and achieve union with their mates.

The dialectical macro-structure of the opera, confirmed by the sonata-allegro construct of the key progressions, reinforces the general thrust of the opera’s plot: the protagonists’ struggle toward the idealistic goals of a community governed by humanistic justice, friendship, justice, and brotherhood and progress toward a better world. A fuller discussion of the opera’s meaning is the subject of the Overview in the North section of this website.