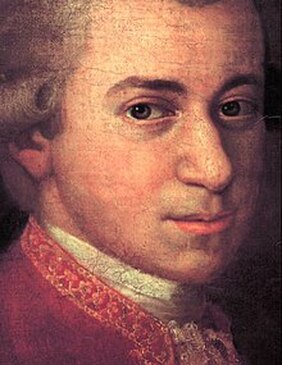 Mozart, c. 1781, detail from portrait by Johann Nepomuk della Croce
​Between 1777 and 1785 several major events impacted the life and compositional style of Wolfgang Amadeus Mozart (1756-1791).
(See: Second Influence- Masonic Funeral Music and Third Influence- "Dissonant" String Quartet No. 19 in C major)
The first of these occurred during the lengthy journey of 16 months that he and his mother undertook to Munich; Mannheim, an important music city and the seat of the Elector Palatinate in what is now western Germany; all in an intense effort to secure a permanent position in a music-loving court anywhere but in Salzburg. Mozart gained significant valuable new tools for his composing: exciting dynamic possibilities and the relatively recent addition of clarinets to the orchestra’s palette. 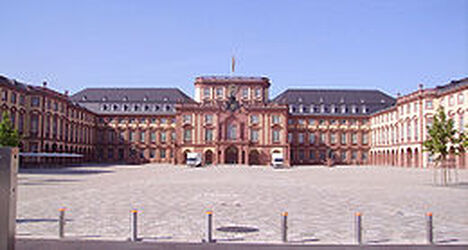 The courtyard of the palace at Mannheim
​But while in Paris, his mother contracted a fever which neither the family’s usual remedies nor a physician could cure; she died there in early July, 1778. Although Mozart had been sending numerous letters to his father in Salzburg giving accounts of his journey and the events occurring in the places he visited, he totally avoided revealing his mother’s death. Only upon his return to Salzburg in January 1779 did he tell his father and sister that sorrowful news. 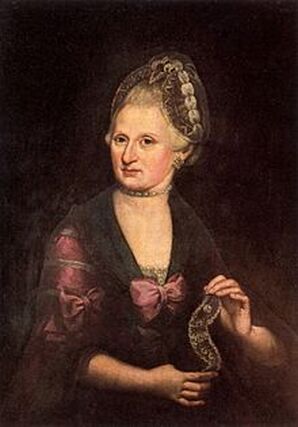 Marie Anna Mozart, 1775
One can only imagine the grief the three Mozarts shared in that year. It appears that Wolfgang’s mourning found an outlet in his composing the Sinfonia Concertante in E-flat (K. 364, 1779). This hybrid concerto/symphony features a solo violin and solo viola with an orchestra including the unusual richness of 2 viola parts. The solo viola part, written in D major, would have required the performer to re-tune (scordatura) his instrument to perform in E-flat, giving it a brighter sound. How remarkable an expression of intimate grief this work reflects might be recognized by the fact that both Wolfgang and his father were skilled performers on the two solo instruments: Leopold, after all, had literally written the book on playing the violin! In my view, the solo viola captures the “voice” of Leopold and the solo viola that of his son Wolfgang. There is, however, no record of the work having been performed in Mozart’s time, although some surmise it was probably performed in Salzburg soon after it was completed. The second movement, in dark C minor, is a quintessential elegy, even to having a funerial procession passage in the course of its unfolding. This passage is highly significant, as it will also appear in a composition of 1785 written for the funeral ritual for two aristocratic Freemasons in Vienna.
Mozart's Sinfonia Concertante in E-flat, K. 364
Itzhak Perlman, violin | Pincha Zukerman, viola
Israel Philharmonic, Zubin Mehta, conductor