In early summer of 1791 Mozart’s attention was divided between his work and some pressing family matters. He was in the midst of composing an opera (The Magic Flute) and a series of commissioned German dances, both of which were anticipated to assist with his flagging financial situation, and applying to secure the position of Kapellmeister at St. Stephen’s Cathedral in Vienna as the elderly incumbent was ill.
On the other front, his wife, Constanze, was in the last two months of her difficult sixth pregnancy and needing the benefits of the mineral springs at Baden, near Vienna; their six-year-old son Karl, went with her. Fortunately, there was a friend, Anton Stoll, living there. Stoll, a teacher and the choirmaster at the parish church in Baden, had in the previous year led a performance of one of Mozart’s masses. In May of 1791 Wolfgang asked his help in finding appropriate lodgings for Constanze and Karl, then went several times during the summer to visit his wife and son. Wolfgang wrote the motet “Ave verum corpus” in Baden on June 17. Peter Clive reports that Stoll conducted its premiere on June 23 at the Baden parish church, and H.C. Robins Landon refers to the premiere on the Feast of Corpus Christi, for which the work was intended. June 23 may be the date on which the Feast of Corpus Christi was celebrated in 1791. 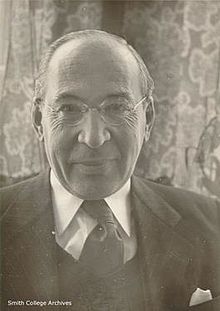 Musicologist Alfred Einstein
Mozart’s music is ethereal, translucent, and seemingly simple. A mixed choir and strings present a new style which he was usinging increasingly often in 1790 and 1791—serene, homophonic (chordal), and devoid of virtuosic flash. The great Mozart scholar Alfred Einstein referred to this as Mozart’s “humanistic” style. Whether it was intended by the composer to be accessible to Stoll’s parish musicians, or whether it was rooted in the Emperor Joseph’s reforms, or connected to the body of Masonic works flowing from Mozart’s avid participation in the brotherhood, or even a display of what he might produce were he to become the new Kapellmeister in Vienna, this is an ineffable work of exquisite beauty, yet only 46 measures long. Its unhurried D-major homophony has moments of chromatic motion and a brief canonic passage, yet for all its simplicity it challenges performers to achieve luminosity through perfect balance, precision, and restraint.
Judith Eckelmeyer ©2017
The choir of King's College, Cambridge sing Mozart's Ave Verum Corpus.