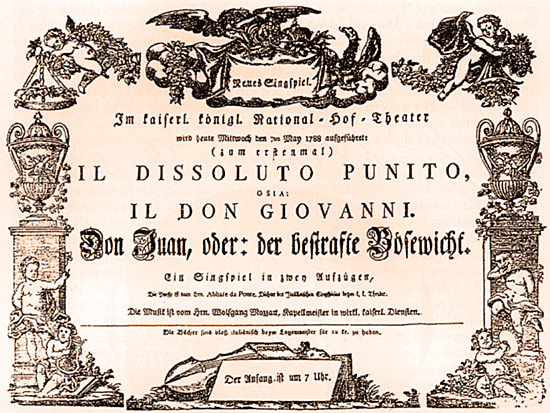 Playbill for the 1788 Vienna premiere of Don Giovanni
​Mozart completed Don Giovanni, his second opera with the librettist Lorenzo Da Ponte (1749-1838), in 1787, a year after the successful masterpiece The Marriage of Figaro. Unlike Figaro, however, Don Giovanni was written for and premiered in Prague, not Vienna. Mozart had close connections to Prague, and the city itself had quite a history of people such as John Dee (1527-ca. 1609) practicing in occult studies (particularly alchemy). Perhaps for that reason, Da Ponte’s libretto and Mozart’s setting of it ended with Don Giovanni’s mysterious demise. When the opera was finally presented in Vienna the following year, an additional finale was added after Giovanni’s demise to bring a rational conclusion to the stories not of Giovanni but of all the other major characters with whom Giovanni had interacted in the course of the opera. Today, this Viennese version is almost always the one to be seen in performances.
Da Ponte had adapted an old story written between 1615 and 1630 by the Spanish monk Tirso de Molina. There are some partial predecessors to Tirso’s work, and several prior to Da Ponte’s, including one by Molière, and numerous successors to Da Ponte’s across Europe and into the 18th century. There are also numerous commentaries and analyses of the opera well into the 20th century, including by psychoanalyst Otto Rank and theologian Søren Kierkegaard. ​
But leaving those aside, I think it’s important to point out that Figaro and Giovanni appeared within 6 years of the start of the French Revolution, an event that brought to a head the increasing unrest in Europe over the inequities of society under the rule of unrestrained hereditary monarchs. Both operas treat societal problem with both deeply serious tone, related to the Opera Seria, and comic or buffoonish elements, derived from Opera Buffa, the comic operas of the time. ​ 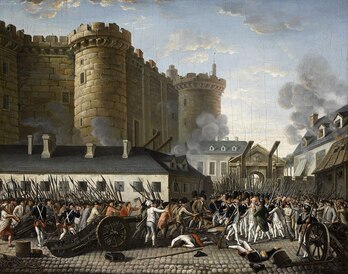 The Storming of the Bastille, 14 July 1789
Of the two operas, Don Giovanni is considerably the darker. The principal character, a nobleman, is the antithesis of all that is presumed to be noble, yet he is, according to some, “heroic” in his determination to remain “free” and unfettered by either societal or religious conventions. He says he is nothing without women, and his hubristic assumption of unchallenged privilege to assault them (even, as his servant Leporello comments, just “to add them to the list”) is matched by his disdain for his victims’ circumstances and feelings of anger and betrayal. His own pleasure is his measure of success. (Ironically, he is shown in the course of the opera to be impeded and frustrated in his attempts to seduce Anna and Zerlina.) To add insult to injury, Giovanni evades capture by his human would-be avengers. Only with the intervention of a deus ex machina, a device borrowed from Opera Seria, could the miscreant be stopped. Thus, while the story is rooted in the troubled reality of the time, it incorporates the supernatural aspects of the highly formal Opera Seria. 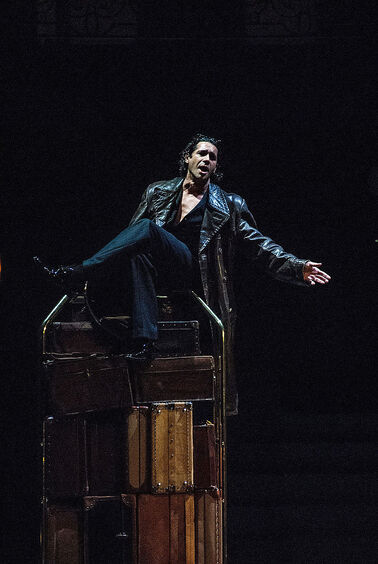 Ildebrando D'Arcangelo as Don Giovanni, Salzburg Festival 2014
While Da Ponte’s text contains pointed, scathing, cynical and sarcastic comments directed toward Giovanni by the other characters, Leporello in particular, Mozart’s opinions conveyed through the musical setting of these comments is generally much subtler. It usually lies in the delivery of the passages by the singers of the respective roles and their action on stage to convey the acerbic intent of the words. However, Mozart’s own authentic contribution to the scorn heaped on Giovanni appears in the three pieces with which a small ensemble serenades their master while he is having dinner in the opera’s finale. Each piece is an aria that originated in a very popular opera around the time Mozart was composing Don Giovanni, and the text of each of the arias would have been well known to the audience; Mozart took the third of them from his own The Marriage of Figaro of the previous year. (Leporello says he knows the tune “only too well”!) And in each case, the texts of these pieces seen in the context of Giovanni’s behavior carry dire warnings of what was about to befall him. Of course he was only superficially aware of  the music and didn’t recognize any the implied warnings, but Leporello did!
THE CHARACTERS IN ORDER OF APPEARANCE:

Donna Anna: soprano, a noblewoman, Giovanni’s assault on whom occurs as the opera begins.

Don Giovanni: baritone, a “noble”man who tries to seduce anything in skirts.

The Commendatore (Commander): bass, a nobleman, Anna’s father who comes to defend her and in the process is killed by Giovanni in a duel.

Donna Elvira: soprano, a noblewoman from another city, previously seduced and abandoned by Giovanni; she wants him to repent in the worst way!

Zerlina and Masetto: a peasant couple celebrating the eve of their wedding. In some ways each is both naïve and very wise; Masetto especially is suspicious of Giovanni’s motives from the start.
​
The Memorial Statue of the Commendatore: bass, who by supernatural means communicates with Giovanni, who invites him to dinner. The statue arrives, to the horror of Leporello and astonishment of Giovanni. 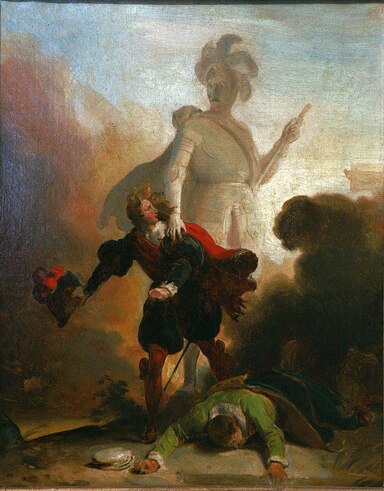