CANTIQUE DE JEAN RACINE
Trans. Judith Eckelmeyer © 2016
Among the authors whom Fauré would have studied at the Niedermeyer School was Jean Racine (1639-1699). Educated at the school in Port-Royal du Champs, south-west of Paris, Racine studied classical literature rich in Greek and Roman mythology; from these studies he formed an approach to drama which shaped French literature and drama during Louis XIV’s regime and after. His plays, fatalistic tragedies, featured a limited number of characters drawn from ancient history and mythology in a plot tightly bound by the Aristotelian “unities” of time, place, and action. Great simplicity and directness of language further marked his style. 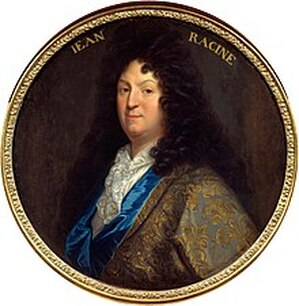 Portrait of Jean Racine
Racine was also strongly influenced by his religious surroundings at Port-Royal, a center for the Jansenist movement in the Catholic Church. Cornelius Jansen (1585-1638), a 17th-century Dutch theologian, derived his ideas from teachings of St. Augustine, emphasizing belief in original sin, human depravity, predestination, justification by faith, and divine grace. Racine was devoted to Jansenism through his interactions with its proponents at Port-Royal; his pious wife also adhered to the sect. Opposed by Catholic clerics and defined as heresy by Pope Innocent X, the movement was seen to verge on Calvinist thinking; the concept of predestination appears to have echoes of inevitability in Racine’s fatalistic plots.
Racine’s paraphrase of the hymn Consors paterni luminis, taken from the Roman Breviary for Tuesday’s office of matins, appeared in 1688 in Hymnes traduites du bréviaire romain.  Fauré’s 1865 award-winning setting of this brief religious poem, which he titled “Cantique de Jean Racine”, was for four-part choir and harmonium. The restrained serenity of Fauré’s music reflects the simplicity of Racine’s poetry, but an inner intensity suggests the fervor of the soul’s reaching for awakening. A revised version, dedicated to César Franck, was scored for string quartet and organ (or harmonium), and premiered in 1866 at the church in Rennes, where Fauré was then serving as organist; Franck himself conducted the work in 1875 at the Société nationale. A further revised version with woodwinds, two horns and string quartet, minus organ, was published in 1905 and performed at the Conservatoire in 1906.​
Judith Eckelmeyer  ©2016
Fauré's Cantique de Jean Racine,
Maîtrise of Radio France, Sofi Jeannin, director
Vincent Warnier, organ
​Gabriel Fauré (1845-1924) spent his first eight years in the environs of Foix, south of Toulouse. His father, Toussaint-Honoré, served as schoolmaster and then inspector of teacher-training in the region for many years. In the latter capacity he brought the family to Montgauzy, where in 1849 Gabriel entered boarding school. Approximate to the school was a chapel, a relic of an abandoned convent, and in the chapel was a harmonium—a simple reed organ which the performer supplied with air by pumping pedals. Young Fauré began his musical life by improvising on this instrument, and seems to have been given some basic instruction on piano at his school as well. He was sufficiently practiced that a visitor who heard him play advised Toussaint to send his son to a new school being opened by Louis Niedermeyer in Paris. Gabriel was accepted as a pupil at age 9 and remained there for 11 years.
​​The Niedermeyer School formed the foundation of Fauré’s career and compositional style. The curricular focus on sacred music and classical education in the humanities was distinctly different from that at the well-established Paris Conservatoire. More important, this was a period in which church music was at its nadir, having been almost wholly disregarded in the aftermath of the French Revolution and fallen under the sway of church officials and congregants with no musical training or regard for the rich heritage of church music. Niedermeyer’s school sought to remedy the effects of the uninformed taste of the clergy and to counteract the influence of popular theater music at the time: it aimed specifically at preparing church organists and choirmasters. Harmony, composition, sight-reading and choral singing, organ (and piano), and conducting all aided in the development of not only the practical work of choirmasters but also of pedagogy—educating younger students in musical skills. Niedermeyer also included studies in polyphony in the curriculum, at a time when the technique was well out of the consciousness of musical training in France. The students sang music of Renaissance composers Josquin, Palestrina, and Victoria as well as of J. S. Bach, not only as part of their studies but also in church services. These experiences appear to have fostered Fauré’s affinity with counterpoint, a technique in which he was particularly skilled, and informed his proclivity for writing long, unfolding melodies.
​While at the school Fauré was heavily influenced not only by Niedermeyer himself but also by an older student, Camille Saint-Saëns, who was at first Fauré’s teacher and then his mentor and friend throughout the rest of his life. Through Saint-Saëns’s classes Fauré discovered then-avant-garde music of Schumann, Liszt, Wagner, and other composers outside Niedermeyer’s canon, and with Saint-Saëns’s encouragement Fauré began to compose. Fauré’s first works as a student were songs, yet early as they were, they display the abiding traits of fluid, beautifully formed melody and sometimes astonishing harmonies that mark all of his music. Among his earliest choral works, the “Cantique de Jean Racine” won first prize in composition in 1865, just at the end of his years at the Niedermeyer School. 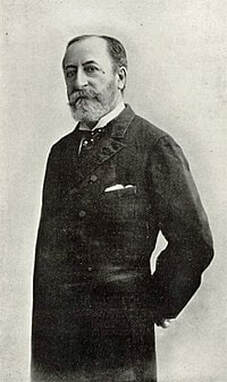 Camille Saint-Saëns circa 1880
​After 1865, Fauré’s career took him into several church positions, interrupted for about eight months by his serving in the infantry during the Franco-Prussian War and briefly teaching composition in Switzerland. Returning to Paris in 1871 he served as second organist at St. Sulpice, where he accompanied the choir and engaged in improvisation “duels” with the primary organist, Charles-Marie Widor. Saint-Saëns introduced Fauré to musicians with whom he joined to form the Société Nationale de Musique, supporting the development of music by French composers.
​In 1874 he became Saint-Saëns’s substitute at the Church of the Madeleine in Paris. He would remain at the Madeleine through many years, first as assistant organist, then as choirmaster, then in 1896 as chief organist. His role as teacher through his years at the Madeleine expanded with his appointment in composition at the Paris Conservatoire, and in 1905 as its director; without question, his work as a composer, widely recognized by his middle and late years, appears to have been greatly compressed by his teaching obligations.
​It may come as a surprise today that as a composer Fauré was considered a renegade, subtly but unquestionably working outside the conservative norms of accepted practice in his time. His extraordinary gift for writing smooth, even sensuous melodies set in rich harmonies rooted in tonality was countered by the boldness of unusual and even frequent key changes, and modal harmonies (derived from his studies of church music at the Niedermeyer School). Some aspects of the Impressionists, his contemporaries, also appear in his music, such as whole-tone scales and tonality-obscuring chromaticism. Besides his many songs and piano pieces, he composed several operatic works and incidental music for the stage, more than a dozen motets of various sizes, two versions of a mass Ordinary, a Requiem, and a number of orchestral and chamber works.