​In celebration of the 250th anniversary of the birth of Wolfgang Amadeus Mozart (1756-1791), this concert presents a sampling of solo and chamber works from the youth to the full maturity of the composer. Common to all the works on this program is the keyboard, Mozart’s primary performing vehicle.

During his lifetime Mozart experienced a change in just what that instrument was. In the early years he played a harpsichord, with its plucked strings, bright metallic timbre, fast sound decay, and unchanging dynamic (there are some interesting implications here for his sonata in B-flat, K. 15). By 1777s the shift to the increasingly popular fortepiano was complete. Mozart had not only experienced this instrument many times but had expressed his preference for instruments of a particular fortepiano maker, J. A. Stein. The hammer mechanism (like the modern piano’s) permitted the player’s touch to vary the dynamics, and Stein’s escape mechanism ensured consistently clear tones because the hammers immediately fell away from the strings.
​On tour in London with his parents and sister, from April 1764 till September 1765, young Wolfgang met and formed a close friendship with Johann Christian Bach, the youngest of Sebastian’s three famous musical children. Christian Bach’s sunny personality and charming Italianate musical style were magnets for Wolfgang, who had already composed several short single-movement works for piano (1761-1763–you do the math!) and four multi-movement sonatas for keyboard and violin both (1762-64). In England, under the benign influence of the “London” Bach Mozart undertook more works in several genres, including his first symphonies. His first six London compositions, today identified as K. 6-15, were multi-movement keyboard (probably harpsichord) sonatas with violin or flute; a cello might also be added to reinforce the harpsichord’s bass notes in the manner of the Baroque continuo. The six sonatas were dedicated to “Her Majesty Queen Charlotte of Great Britain by W. Mozart, aged eight years, in London...1765” and published in London later that year.
​​The sonatas in A, K. 12, and B-flat, K. 15, are the only two of the set that Mozart cast in two movements; the rest are in three or four movements. The Andante first movement of the A-major sonata shows the gracious melodic style J. C. Bach modeled for Mozart. The second movement, Allegro, is facile and dance-like yet without the structure or deliberate pulse of a minuet.

The B-flat sonata has a different character entirely. Its first movement, marked Andante maestoso, opens with imperious dotted rhythms in the keyboard, marked forte, while the violin/flute outlines a descending arpeggio. These gestures are answered very quickly by a linear melody in the keyboard, marked piano. The two styles and dynamic levels alternate dramatically throughout this highly distinctive movement, suggesting that Mozart probably conceived this movement for a harpsichord with two manuals, a practical necessity for fast, abrupt “terraced” dynamic changes. (Fortepianos were available in England and much appreciated by J. C. Bach, but, as William J. Conner notes in the New Grove, his first public performance on that instrument was in 1668, about four years after Mozart wrote this sonata.) The second movement, marked Allegro grazioso, seems light and playful. No dynamic contrasts are marked in the score; rather, contrasts are provided in the texture by detached melodic notes and grace notes and later by longer purling passagework in the keyboard against the detached working of the violin/flute.
Sonata for Keyboard and Violin in B flat major, K. 15
​Gary Cooper, harpsichord | Rachel Podger, violin | Alison McGillivray, cello
​Mozart wrote the C-major piano sonata,  K. 330, and four others while in Paris in 1778, evidently without expecting them to be performed publically. The C-major sonata consists of three movements, Allegro moderato, Andante cantabile, and Allegretto, all in a charming and unruffled style. Mozart clearly conceived of them for fortepiano, for the dynamic markings are frequent and varied, especially in the first two movements. The second movement, organized as a rondo, is especially interesting for its beautiful long melodic line and expressivity in the Sensitive style. Here Mozart employs not only the forte and piano dynamics and crescendo markings but even requires the  pianissimo level and dolce touch on the instrument. The Allegretto movement projects playfulness with its frequent triplets and rhythmic gasps and syncopations.
Piano Sonata No. 10 in C major, K 330
Andreas Staier - Fortepiano
​The Trio in E-flat, K. 498, called the “Kegelstatt” trio, is a cheerful three-movement work from 1788–the year of the last three symphonies. Mozart wrote the work for Anton Stadler, the acclaimed clarinetist and a friend who inspired Mozart’s late clarinet works, and Franziska von Jacquin, Mozart’s talented piano pupil; he himself was to be the violist.
​
​This trio acquired nickname “Kegelsatt” sometime after its composition. “Kegelstatt” means “skittles alley”, akin to a modern bowling alley. The unsubstantiated story is that Mozart composed the work while playing a game of skittles or ninepins. Some biographers think that even Mozart would not have been able to produce this little gem in such an environment. However, I think that, if he did not literally compose the work there, Mozart may well have used some of his (probably extensive) skittles-alley experience in composing it elsewhere, and that not only the organization of the work but also the content of the middle movement have characteristics that make this a plausible theory. How might this be so? Let’s consider ... 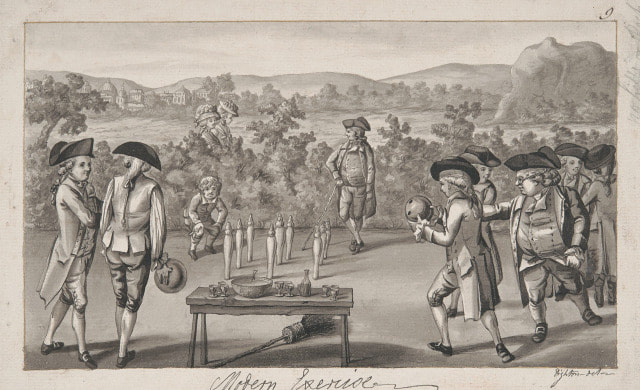 An example of skittles or ninepins. Modern Exercise, one of twelve illustrations to Contemporary Life and Diversions by Robert Dighton. Yale Center for British Art, Paul Mellon Collection
The work’s three movements are Andante, in a modified sonata form; a Menuetto with a minor-key trio; and a Rondo. Of these, the third movement has the greatest number of measures, 222 (without repeats) against 129 in the first (which has no written repeats!) and 158 in the second. However, in performance the ratio changes hugely: the second movement with all repeats as indicated in the score becomes 398 measures against only 268 in the third. Now the second movement has the greatest physical or numerical dimension, and its middle, the trio, is by far the longest section of the movement. This arrangement mimics the layout of the nine pins of skittles, as seen from head-on; there are five rows of pins, each corresponding to a movement or the sections of a movement (the Menuetto/Trio):
0
0        0
0       0        0
0        0
0
1,  [2,  3,   2]   1

Besides this structural analogy to the skittles set-up, the second movement’s trio has arresting musical features that call our attention to it. First, there is a startling minor key focus. Then, a seeming three-part structure actually folds a coda of the trio into a repeat of the Menuetto. The viola part becomes highly visible (the viola also shines in the final movement). And finally, Mozart gives a highly unusual organization to several eight-measure phrases in which a five-bar chromatic passage, involving very close imitation between contrapuntal voices in the piano, is concluded in three measures by a standard harmonic progression. There are also audible instances of opposite motion within the piano part and between the two melody instruments. The effect of the intense chromaticism and tightly-controlled motion of the pitches suggests physical motion--a chain reaction precisely analogous to the scattering motion of the five visible pins (seen head-on) once one of them tumbles into another. Against the drama in the piano, the viola (Mozart’s part) takes up a long line of triplets that “nudge” the piano’s pitches to their final goal in a kind of sonic “body English”. 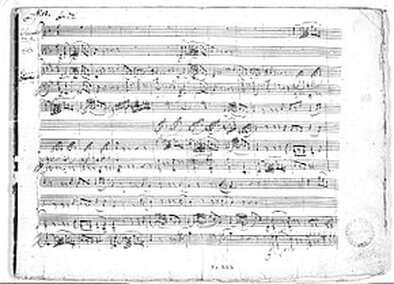 Trio in E-flat, K. 498 (first page of the autograph)
​Is such a reading of the “Kegelstatt” trio valid? Well, we know that Mozart was excellent at billiards, which has the same cause-and-effect reaction in it as skittles, and we know he was a master at working out in music equally complex inter-personal relations (as in the operatic world of Figaro, which preceded this trio by only a few months). We know, too, that he did incorporate physical gesture into his music, as in the grandiose salute and bow that opens the “Haffner” symphony and the challenge and sword fight in Don Giovanni, to mention just tow examples. In the “Kegelstatt” trio we may be experiencing yet another example of Mozart’s game-loving and theater-oriented mind bringing “real life” to bear on his music.
​
Piano Trio No. 2 In E-Flat Major, K. 498, "Kegelstatt"
Andras Schiff (fortepiano) | Erich Hobarth (viola) | Elmar Schmid (clarinet).
Licensed to YouTube by WMG (on behalf of Teldec Classics International); Public Domain Compositions
​​​Mozart wrote the Piano Quartet in G minor, K. 478, in 1785 for violin, viola, cello and piano as the first of three to fulfill a contract from the Vienna music publisher Hoffmeister. Once published, the work sold poorly, largely because of its difficulty and possibly because of its unusually intense first movement, so Mozart released Hoffmeister from the contract and had his second Piano Quartet in E-flat, K. 493, of 1786, published by Artaria. These are Mozart’s only two examples of the genre.
Piano Quartet in G minor, K. 478
The Smithsonian Collection of Recordings
James Weaver, fortepiano | Jaap Schröder, violin | Judson Griffin, viola | Kenneth Slowik, cello
Performed on period instruments
​Those familiar with Mozart’s late works will recognize in the G-minor piano quartet several significant styles and thematic topics. First, G-minor, one of the signal “Storm and Stress” keys of Mozart’s maturity, is held in common by the string quintet, K. 516, of 1787, the famous symphony of 1788, and Pamina’s grief-stricken aria in The Magic Flute, 1791.
Pamina's Aria from The Magic Flute
Anna Prohaska, soprano
Simón Bolívar Youth Orchestra of Venezuela, Claudio Abbado conductor
Stylistically in all of these, the expression of passion can be keenly felt in the sweeping melodic ranges, dynamic changes, interruptions by silences, unusual phrase lengths, and intense dissonances. The Piano Quartet’s opening movement contains all of these. More links to other late minor-key works occur in this movement: a thematic resemblance to a chain of works, culminating the introduction to the song of the Two Armored Men in The Magic Flute, which begin with an insistent rhythmic unison followed by a descending melody leading to a dominant-chord pause, then a similarly-constructed answer ending on a tonic-chord pause. A related melody connects with the first and third movements of the D-minor piano concerto and Pamina’s aria. Given the importance of the piano and the complexity of writing for the three string instruments, this movement is really a companion piece to the powerful minor-key piano concertos in D-minor and C-minor, from about the same time as this quartet.
​The almost hymn-like simplicity of the quartet’s second movement links it with the serene “humanistic” style, which Albert Einstein identified, and which we hear in such late works as Sarastro’s arias in The Magic Flute and the middle movement of the Clarinet Concerto. Fragments predict material in the D-minor piano concerto and Pamina’s aria.
Sarastro's Aria
Sándor Svéd | Mihály Székely | László Pless
​Orchestra of the Hungarian State Opera House
The final movement, a rondo, surprises with its G-major lightheartedness. The storm and the introspection are almost entirely forgotten, except for the minor-key episode near the end. That, too, is abandoned for the bustling conclusion in G major.
​
Judith Eckelmeyer 2009