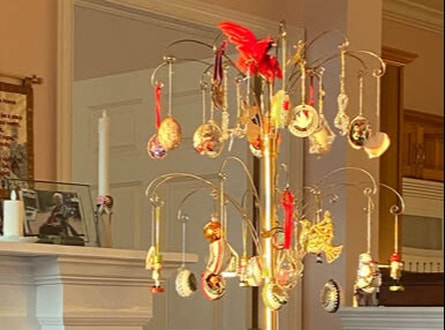 I became interested—no, fascinated—with the possibility of decorating eggs many years ago when I was visiting a friend who invited me to join her in a crafty afternoon of attaching feathers, ribbons, glass gems and beads from costume jewelry, and other interesting small items to Styrofoam balls to hang on a Christmas tree. A bit of time went by in which I did nothing to practice such a craft, but late one fall I remembered that earlier experience and decided to work out a way to use eggs instead of artificial materials. What I wanted to do was work with the shell, both inside and outside, for my project.

There were some problems to solve. In order to get the shell emptied there had to be a way to empty it and create an opening large enough to receive small items and decoration materials. I couldn’t cook the egg first, of course. “Blowing” the egg through a pin-hole wasn’t going to provide the raw egg had to be liberated by making a hole in the side of the shell and letting the contents drain out. (I usually found someone who would use these contents for baking, so there really was no waste.) The inside of the shell had to be thoroughly rinsed with cold water to remove any vestige of the egg white or yolk to prevent odor from forming. Further, the jagged edge of the hole had to be made smoother and as symmetrical as possible. All this had to be done without cracking the shell.

I learned to cut the sharp peaks of the hole’s edge with scissors, and over the years I did lose a number of shells that just weren’t thick enough to tolerate that process. Another lesson: organic eggs had the toughest shells but were usually brown, and I needed white shells. It took some searching but I found several stores where I could get “good” eggs.

Once the eggs were cleaned, dry and shaped, the imagination took over. Materials from craft stores such as Michael’s, on-line resources for ribbons and sequins, and caches of old jewelry or miniature figurines served as a basis, but the breadth of options expanded as ideas for new designs came to me. Almost all of the eggs were planned as gifts for specific people, so it was fun to work out how to decorate the shell both inside and outside to make the egg visually relevant to the individual.

In every case, the process of decorating was a slow one. Often the interior figures had to be prepared with separate small parts glued together; it might take an over-night to make sure the pieces were secure. Learning how to apply the thin ribbon around the outside circumference took patience and practice. This “art” became a weeks-long event during the late fall and early winter evenings prior to Christmas.

​Egg Art has been a delightful expression of creativity, ingenuity, and problem-solving for me over several decades. I would recommend it as a craft option for anyone! 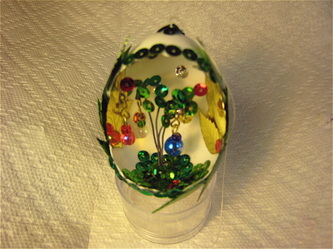 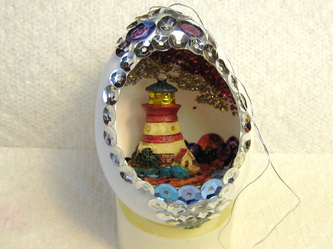 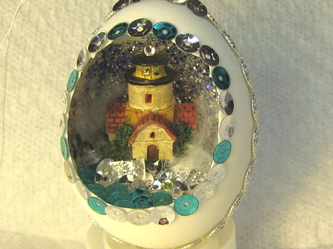 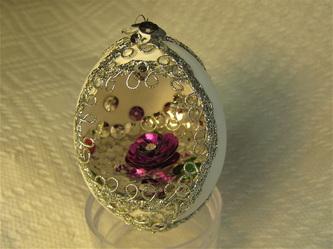 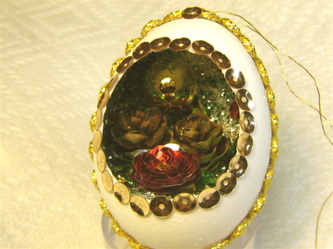 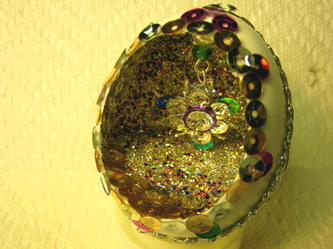