(Excerpted from the program notes for the Fall Choral Concert presented at Trinity Cathedral on November 21, 2014)
The music of Johann Sebastian Bach (1685-1750) has been revered by listeners, churchgoers, and musicians of all stripes the world over for good reason: it is technically superb, artistically impeccable, symbolically rich, and emotionally satisfying, and performers find it among the most demanding music there is. 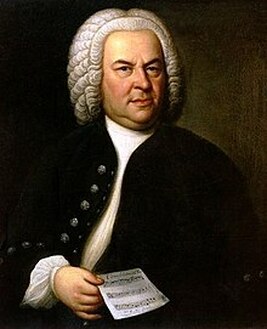 Johann Sebastian Bach, 1746
​Bach was born in Eisenach, Germany, into a devout Lutheran family of strong musical bent (and he extended this musical tradition to his children). An exceptional keyboard performer, he also played violin, and was even in his teens an outstanding organist; in his maturity he was respected as perhaps the best organist at least in Germany if not the world.
​​Of the five major positions he held, three were as a church musician (at Arnstadt, 1703-1706, Mülhausen, 1707-1708, and Leipzig), meaning that he served variously as a church organist, choir director, and composer. 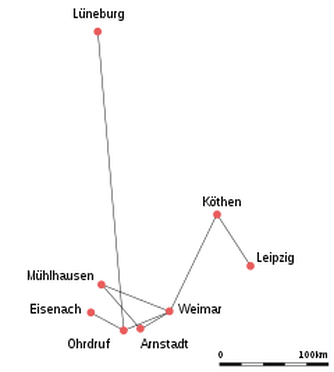 Places where Bach lived.
At Arnstadt the 18-year-old Bach also began a tangent of his career as an organ inspector, tester, and exhibitor—work for which he would be sought through the rest of his life.
​At Weimar, 1708-1717, he was primarily a music teacher to the duke’s nephew, a court organist, chamber musician, and also a church organist and composer. 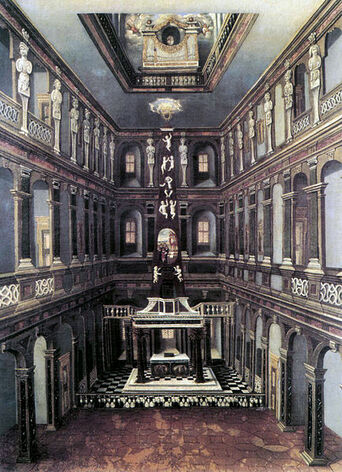 Schlosskirche Weimar, oil painting on canvas. Portrayal of the inside of the Palace Church, which burnt down in 1774 (J. S. Bach worked as court organist in this church)
At Anhalt-Cöthen, 1717-1723, in the completely secular position of Kapellmeister, he composed primarily for the elector and his instrumentalists. But he also was raising a family there, so he created extended didactic works systematically laid out to train young students, including his own children. Bach’s works from the Cöthen years range through all instrumental genres (and a few songs) except for organ: suites; sonatas and concertos; collections of educational works such as the clavier books for his wife, Anna Magdalena, and his son Wilhelm Friedemann; two- and three-part keyboard inventions; and the preludes and fugues comprising Book I of the Well-Tempered Keyboard.
By far Bach’s longest employment was at Leipzig, from 1723 until his death. Leipzig was a bastion of Lutheranism, and the city government was a de facto voice of church policy. Here, as the town council’s sixth choice for what was essentially a civic job—Director of Music for the city—Bach was obliged to provide, direct, and supervise music in the city’s two major churches, alternating between Thomaskirche and Nikolaikirche, and at civic events, as well as at festivals at the church at Leipzig University. His “day job” was as Kantor (third in seniority) at St. Thomas School, where he was responsible for teaching singing and music skills to the boys, preparing them to perform the music in church services, and generally assisting with supervising their daily activities. He was originally required to teach subjects other than music, such as Latin and mathematics, but he quickly found a replacement whom he paid to take over those classes.
​For a period he also served as director of the collegium musicum at Leipzig University. Not surprisingly, because he needed music every week for the city’s two important churches, he was continually composing sacred works. The great majority of his cantatas are from this period, as are the passions, the Christmas and Easter oratorios, the Mass in B minor, the motets, and again collections of pedagogical works such as a portion of the Clavier-Übung and the Art of Fugue. 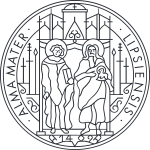 Crest of Leipzig University
Two vocal genres that Bach needed for the church were cantatas and motets. The cantata, involving a choir, soloists, and instrumental accompaniment, usually begins and ends with a chorale, or Lutheran hymn, with which the congregation would be very familiar and would join at the end of the work. The body of the cantata would alternate between chorale verses, new prose set as recitative, and poetry set as an aria; all were generated from the scripture for that day. Thus the cantata formed a kind of supplement to the pastor’s sermon. Bach wrote hundreds of sacred cantatas, famously cycles for four years in Leipzig. Some 200 (about 60%) of the total for his career are extant. 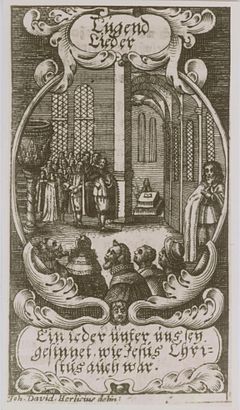 Page from the Neues vollständiges Eisenachisches Gesangbuch, the Lutheran hymnal that was in use in the Eisenach of Bach's youth.
The motets, of which there are only six or seven (there is a debate over authenticity of one of them), are for choirs from four to eight voice parts, with texts either from scripture or newly written sacred poetry. Written for special occasions such as birthdays or funerals, most of them in some way include a chorale. Even though they are for an ensemble of voices, the motets are more technically advanced than the cantatas.

The authenticity of “Lobet den Herrn, alle Heiden” was for a long time questioned because of its stylistic features. Now, however, this motet is generally accepted as a work by Bach, although there is no known commission or occasion for it, and, uncharacteristically, there is no chorale within it. Unlike the other motets, its four choral voices are supported by obbligato organ, which Gerhard Homann, writing for the 1982 Bellaphon recording, explains as evidence the motet was intended the Leipzig University’s Pauline Church, the one church in the city that allowed instruments in funeral services. Bach set verses from Martin Luther’s translation of Psalm 117 in several sections, marked by changes in theme, texture, and tempo. The abundantly cheerful tone is established from the beginning by an unusually wide rising fugue subject on the word “lobet” (praise); on “preiset” (extol), a second fugue with a subject begins in downward direction. A quieter, more homophonic section affirms trust in God’s grace and guidance. The ebullient “allelujah”, a dance-like fugue, joyfully concludes the work.

Praise the Lord, all nations, and extol him, all people;
for his mercy and truth rule over us forever. Alleluia.